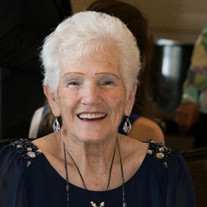 Adelaide V. Beshoar 1943 – 2019 Adelaide Beshoar, 75, passed away peacefully on January 23, 2019, from complications of a stroke. Adelaide was born in Waterloo, Iowa, on February 22, 1943. She grew up there, and in 1961, she met and married her first husband, Walt. They had three children, Brenda, Wendy, and Wally. She moved to California with her children in 1979, and over the course of 39 years she worked in Aerospace, sales, home remodeling, and piano bar entertainment as a singer songwriter and piano player. In the late ‘70s she made a record with two of her songs, “Proud to be a Mother,” and “Wasting His Time.” “Proud to be a Mother” was adopted as the theme song for the California based HOW organization. In 1992, she met and married the love of her life, Ben Beshoar, who passed away in 2007. The two of them often worked together in his electrical business and in 1999, they moved themselves and the business to Tehachapi. Mom was a hardworking, honest, generous, and compassionate woman who could do anything once she set her mind to it. She loved to entertain and treat people. Her favorite times were the holidays and getting together with family whom she dearly loved. She was preceded in death by her parents; sister, Barbara; first husband, Walt; and her second husband, Ben. She is survived by her sister, Phyllis; brother, Dick; her three children and their spouses; her grandchildren Jason, Melissa, Johnny, Alisia, Brandon, Chris, Jessica, Alex, Walter, and Dakota; and six great-grandchildren. We loved her dearly and can’t believe our mother is gone and that such a beautiful, strong light has left this world. Mom, you will be forever missed. Wood Family Funeral Service was entrusted with her care. For condolences please visit www.woodmortuary.net.

The family of Adelaide V. Beshoar created this Life Tributes page to make it easy to share your memories.

Send flowers to the Beshoar family.