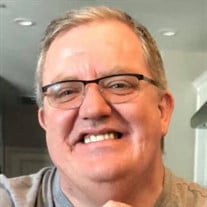 Bill Wolford passed away at the age of 52 on December 27th, 2019, in Tehachapi, CA. A memorial service was held at Wood Family Funeral Chapel on Friday, January 3rd at 10:00 am. Arthur “Bill” William Wolford was born on December 18th, 1967, in Ely, Nevada to Merrill Wolford and Pauline Lunkwitz. He graduated from Elko High School in 1986. After graduation, he joined the U.S. Air Force where he served for four years. He then worked at McDonnell Douglas in Long Beach. In 1994, he returned to Elko, NV and fell in love with his wife, Kyla Wolford. They had a whirlwind romance and were engaged a month after they met and married 7 months later, on June 17th, 1995. They had four children, Landon (Elko, NV), Brianna (Madison, WI), Jacob and Kayson Wolford. The family relocated to Lompoc, CA in 2009, and then to Tehachapi, CA in 2018. Bill worked in the mining industry for 25 years and was an Instrumentation and Electrical Superintendent at Rio Tinto until the time of his death. Bill was a devoted Kansas City Chiefs and Los Angeles Dodgers fan. He loved watching and playing sports of all kinds. He also had a passion for acting, starring in over 15 plays during his time in Elko, NV. Bill loved to travel around the United States with his family to see new places and had a soft spot for good views and amusement-park rides. He also traveled the world, including to Peru where he earned his infamous nickname, Arturo Godzilla. He was an Eagle Scout and as well as an active member and leader of the Boy Scouts of America with each of his sons. He was a proud Air Force veteran and father of both a Marine and an Army soldier. He was an active member of the Knights of Columbus and American Legion. Bill loved people and never met a person he couldn’t hold a conversation with. He was never afraid to ask questions and was a life-long learner. He was a great father and extremely proud of each of his children, always encouraging them to make good decisions. Bill is survived by his wife Kyla; 4 children Landon, Brianna, Jacob, and Kayson; mother Pauline and stepfather Floyd (Twin Falls, ID); father-in-law Pete Smyle and wife Betty (Hotchkiss, CO); two nieces and their families Rachel, Dustin, and Daphne Gans (Nampa, ID) and Paula Wolford and Casey Bradley (Caldwell, ID); in-laws and their families Brian Smyle and Naomi Vanhove (Scranton, ND); Howard and Lisa Rice (Burlington, ND) and their children Brooke, Katie, Jared, and Jaycee Walter. He was preceded in death by his father Merrill Wolford, sister Julie Wolford, mother-in-law Kay Smyle, brother-in-law Lavene Smyle, and grandparents. In lieu of flowers, please send donations to Shriners Hospitals for Children over 15 and the Mahomies Foundation in remembrance. Both charities are committed to improving the lives of children, something Bill was very passionate about. Wood Family Funeral Service handled the arrangements. Thank you for your continued love and support.

Bill Wolford passed away at the age of 52 on December 27th, 2019, in Tehachapi, CA. A memorial service was held at Wood Family Funeral Chapel on Friday, January 3rd at 10:00 am. Arthur &#8220;Bill&#8221; William Wolford was born on December... View Obituary & Service Information

The family of Arthur William (Bill) Wolford created this Life Tributes page to make it easy to share your memories.

Send flowers to the Wolford family.