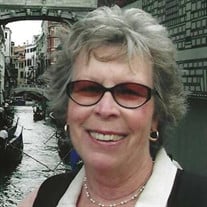 Barbara Lee Menjou (Boyle), 74, passed away peacefully on March 1, 2022, at Hoffmann Hospice Home in Bakersfield, California, following a brief illness. Barbara was born on March 20, 1947, in Pasadena, California, to Vergil and Lilias Boyle. She was raised in a loving home in South Pasadena, California, with her sister Jodene (Jody). She attended local schools and graduated from South Pasadena High School in 1965, where she was the Tiger Mascot. Following graduation, she entered the workforce, employed mostly in law firms. She began as a clerk and worked her way up to legal secretary and then to Personnel Manager at Meserve, Mumper, and Hughes in Los Angeles, California. She met her future husband, Peter A. Menjou, at that firm, and they were married on May 10, 1986. Barbara and Peter lived in Malibu, California, until 1993, when they retired and moved to Durango, Colorado. They enjoyed the beautiful scenery and the numerous outdoor activities the area had to offer, such as skiing, fly fishing, and hiking. They loved entertaining their large circle of friends, and Barbara volunteered at the La Plata County Humane Society Thrift Store, while also serving in numerous capacities on the Humane Society Board. Barbara and Peter loved to travel and took memorable trips to the Amazon Rainforest, Egypt, Antarctica, Belize, the Caribbean, and Churchill, Canada. After Peter’s passing, Barbara visited Italy with her niece, Amy Watkins. Peter had three children from a previous marriage: Michael, Carrie, and Christopher; and Barbara enjoyed a very close relationship with them. Peter passed away on September 6, 2000, and Barbara moved to Bear Valley Springs, California, in 2001 to be closer to her family. She adored her large country home and enjoyed walking her dogs with friends around Cub Lake, spending time with her loving family and friends, reading, watching classic movies, shopping, gardening, and viewing the deer, elk, and other wildlife that roamed her property. Barbara had a special talent for interior design and landscaping, and her homes and yards were always showplaces. Barbara never met a stranger and was kind, generous, thoughtful, and caring to her family, friends and even strangers. Barbara’s family and animals were the most important things in her life; and she was an amazing daughter, sister, aunt, and stepmother. She had a brilliant sense of humor and was the life of any party. She will be greatly missed by everyone whose lives she touched. She was preceded in death by her husband, Peter Menjou; her parents, Vergil, and Lilias Boyle; her Grandparents, Ciel and Hazel Boyle, Margaret Jacobsen, and Lee Coleman; and numerous aunts, uncles, and cousins. Barbara is survived by her sister, Jody Watkins (Jim); her niece, Amy Watkins (Aaron); her nephew, David Watkins (Krystal), and her great-nieces, Aubrey, and Brenna Watkins. She is also survived by her stepson, Michael Menjou (Melodie), granddaughter, Heather Kay and great-grandchildren, Cody, and Jett Kay; her stepdaughter, Carrie Hicks (Jeffrey), and grandchildren, Kelsey Houck, and Evan Reed; her stepson, Christopher Menjou (Wendy); her beloved dog, Sophie; and numerous special cousins and friends. In accordance with Barbara’s wishes, no formal services will be held, and her ashes will be scattered over the Pacific Ocean. A celebration of her life will take place at a future time. If desired, please make donations in Barbara’s name to the Alzheimer’s Disease Association or Hoffmann Hospice.

The family of Barbara Lee Menjou created this Life Tributes page to make it easy to share your memories.

Send flowers to the Menjou family.