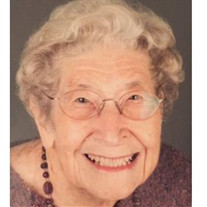 Beth Enid Yocum 1923 – 2017 Beth Yocum was born Beth Baker on Friday, February 2, 1923, at the local doctor’s office in the town of Fillmore, CA. Her family home was nearby, in the rural community of Bardsdale, CA. In her early school years, Beth’s mother became extremely ill with tuberculosis and needed care in a sanatorium. In order to meet the costs of this care, Beth’s father sold their farm and went to work for Standard Oil. The result of these upsets necessitated that Beth and her two brothers be dispersed among nearby relatives. Beth was in junior high school when her mother recovered enough to return and reunite the family. By now the country was in a depression, but with the help of a government loan, her father was able to buy the farm that his parents owned. Hard times became brighter with the family back together. During World War II, Beth worked at the U.S. Naval Base in Port Hueneme before she entered nurse’s training at the Los Angeles County Hospital. While in nurse’s training, Beth became close friends with Gevene Yocum, who many in Tehachapi knew as Gevene Robinson. Along with Gevene, Beth was planning to become a missionary nurse, and she did become a registered nurse. Beth married Gevene’s brother, Robert, who became a Baptist minister, leading them to make their home in this country. They had three children, Audrey, Samuel, and Russell. Beth passed away in Tehachapi, CA, on Saturday, August 5, 2017. Along with the three children she leaves behind, she is survived by three grandchildren, five great-grandchildren, and five great-great-grandchildren. She has been laid to rest next to the love of her life, Robert, at the Tehachapi Public Cemetery – Westside. A memorial service will be held at Country Oaks Baptist Church, 20915 Schout Rd., Tehachapi, CA, on Friday, August 25, 2017, at 11:00 a.m. Beth would want you to know that she is now with Robert, both in Heaven with the Lord, forever and ever. Arrangements were made with the assistance of Wood Family Funeral Service. For condolences please visit www.woodmortuary.net.

The family of Beth Enid Yocum created this Life Tributes page to make it easy to share your memories.

Send flowers to the Yocum family.