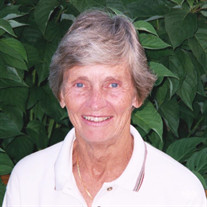 Betty Hoff Buss 1930 – 2018 Betty Buss passed away peacefully in Stallion Springs, CA, on January 29, 2018, at the home she shared with her husband, Jack Buss. Born April 9, 1930, to Stanwood and Bernice Hoff, Betty grew up in Bound Brook, NJ, with her older sister, Hope. Betty attended Allegheny College, then graduated from secretarial school. Besides working as a secretary for many years, she later managed family businesses, including a Dutch seed import company. Betty met Jack through church when they were teenagers; their first "dates" were Sunday dinners at her parents’ house. Married in 1950, this past September they celebrated their 67th anniversary, still sharing an everlasting love sustained by humor and kindness. They worked together building their first home in Somerville, NJ, and lived there until moving to Westlake Village, CA, in 1968. Upon Jack’s retirement in 1991, they moved to Stallion Springs, CA, where Betty delighted in their gorgeous view, the abundant wildlife, and friends too numerous to mention. Betty was a beautiful woman with musical, athletic, and creative talents. She played violin in the Tehachapi Symphony Orchestra until a few years ago and, in earlier times, a banjo at sing-alongs. Betty was a founding member of the Killington Ski Club in Vermont, spending most winter weekends on the slopes. After moving to California, tennis and golf became her passion; she excelled at both, winning several tournaments. Betty could often be seen zipping around Westlake on her motorcycle, wearing the darling tennis outfits she sewed. Betty's love was felt in her gifts of edible goodness and tireless help in the kitchen during gatherings of friends and family. Besides being an active member of the local church, Betty and Jack traveled extensively often with or to visit friends. For fifty years, they spent summers at Silver Bay Association, a YMCA retreat on Lake George, NY, where Betty loved the sailing, breathtaking beauty, and a bountiful group of close friends and family. Betty is survived by her husband, Jack; sister, Hope Russell; brother-in-law, Dave Buss and his wife, Francine. Also survived by a nephew and six nieces, whom she showered with unconditional love, Connie Hilbert, Scott Russell, Cheryl Raap (Ken), Sandra Russell (Jim), Sue Locke, Jaimie Buss (Bryan), and Denise Flynn (Russell); plus many grand and great-grandnieces and nephews. Predeceased by brother-in-law, Harry Russell, and Connie’s husband, Richard. Betty’s warm smile, gentle humor, and sparkling bright blue eyes will always be in our hearts. For those who wish to attend, a committal ceremony will be held at the Bakersfield National Cemetery, 30338 East Bear Mountain Blvd., Arvin, CA, on Friday, February 16, 2018 at 1:15 p.m. At 2:30 p.m., a celebration of Betty’s life will be held at Wood Family Funeral Service, 321 West F Street, Tehachapi, CA, with a reception to follow. In lieu of flowers, memorial contributions may be made to a charity of your choice. Services are being arranged through Wood Family Funeral Service, Inc. For condolences please visit www.woodmortuary.net.

The family of Betty Hoff Buss created this Life Tributes page to make it easy to share your memories.

Send flowers to the Buss family.