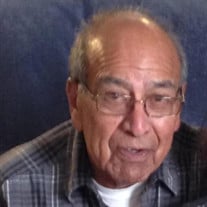 Charles “Carlos” Martinez passed away quietly in his home on December 12, 2020, he was 88 years old. Carlos was born to his parents, Jose and Loretto, on July 9, 1932 in the Tehachapi house that his father built. Carlos graduated from Tehachapi High School and was an accomplished football and basketball player. He then joined the United States Army where he was stationed for three years in San Francisco, with a brief tour of Alaska. It was during this time that he developed his lifelong love for the San Francisco 49ers. In 1955, Carlos met (his Honey) Jean Collins, and they were married a year later. They were happily married for 63 years. Together they loved camping and took yearly trips to go fishing in the Sierra Nevada. They especially loved traveling to Carson City to visit his brother Joe, his wife Lucille and their families. He also loved having large family gatherings centered around food and traditional family recipes, particularly Tri-Tip and homemade ice cream. Carlos spent his career of 44 years at Monolith Portland cement company, where he started as a laborer and worked his way up to first class electrician. After his retirement, Carlos enjoyed watching football and spending time with Jean and their children, grandchildren, and great grandchildren. Carlos loved, adored, spoiled, and cared for Jean until her passing in 2019. He was a kind and funny man who was well respected and admired by so many people. Carlos is predeceased by his siblings: Joseph, Rachel, Robert, Stella, and Jenny, and his daughter in law, Darla. Carlos had such influence on and is survived by his three children, Joe, Mike (Sally), and Sharon (Randi); his seven grandchildren: Angie (Wayne), Joey (Stevie), Jessica, Robert (Riana), Erin (Adolfo), Anthony (Julia), Derrick (Casey); his seven great grandchildren: Joscelyn, Madeleine, Mason, Curtis, Charlie, Cruz, and Sophie, and all the nieces and nephews too numerous to mention though he loved them all. Carlos will be placed to rest at Bakersfield National Cemetery with military honors and a private service will be held at a later date.

Charles &#8220;Carlos&#8221; Martinez passed away quietly in his home on December 12, 2020, he was 88 years old. Carlos was born to his parents, Jose and Loretto, on July 9, 1932 in the Tehachapi house that his father built. Carlos graduated... View Obituary & Service Information

The family of Charles "Carlos" Martinez created this Life Tributes page to make it easy to share your memories.

Charles “Carlos” Martinez passed away quietly in his home on...

Send flowers to the Martinez family.