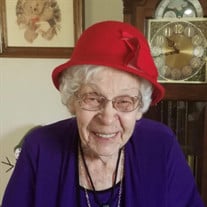 Cornelia Catherine Bakker Gollnick known as “Corky” passed away in Tehachapi, California on January 25, 2022, one day before her 93rd birthday. She was born in Sioux City, Iowa on January 26, 1929, and was the second youngest of nine children born to Jon and Addie Bakker. She attended high school in Eagle Rock, California, and college at North Central Bible School in Minneapolis, Minnesota. There she met John Gollnick whom she married in August 1949. Together they pastored the Assemblies of God church in Northfield, Minnesota for twelve years and had five children. While in Northfield, Corky was involved in organizing the summer Vacation Bible Schools and the Christmas programs for the church. She played the accordion, piano, and organ. Her interests included the latest in technology for presenting Bible stories with slides and music to the children’s church. After moving to Simi Valley, California in 1961, they continued to be active in their local church. They later moved to Costa Mesa where Corky directed a church preschool and John was on the pastoral staff of Newport-Mesa Assemblies of God. When they moved back to Simi Valley, she worked as the bookkeeper for the family business, Gollnick Masonry. Retirement brought a move to Stallion Springs, California, where Corky and John hosted a Bible Study in their home. The Bible Study grew, and they founded Stallion Springs Community Church. Corky’s husband, John, passed away in 2016. They were married 67 years and enjoyed many road trips to the Midwest in their RVs. Corky is survived by her sister, Sharon Evans; three daughters, two sons, 12 grandchildren, and 13 great-grandchildren.

Cornelia Catherine Bakker Gollnick known as &#8220;Corky&#8221; passed away in Tehachapi, California on January 25, 2022, one day before her 93rd birthday. She was born in Sioux City, Iowa on January 26, 1929, and was the second youngest of... View Obituary & Service Information

The family of Cornelia Gollnick created this Life Tributes page to make it easy to share your memories.

Send flowers to the Gollnick family.