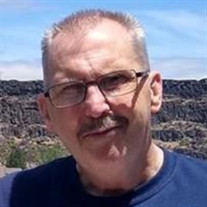 Delbert Hill, 58, of Tehachapi, Calif., passed away on July 6, 2020. He was born on August 24, 1961 in Memphis, Tenn. to Cullie Clayton Hill, Jr. and Sue Hill. A longtime resident of Tehachapi, Del worked in the community at several local establishments over the years, including Domino’s Pizza, the Hitching Post Theaters, and most recently, Walgreens. It was from his time spent with Walgreens where most of his local community will remember him. He has spent years dedicating himself to his work and making each person that he interacted with feel special. Del was a simple man by his own recognition. He was a “work, home, and church guy.” He dedicated himself to his work, his home and family, and the Lord he loved. As a young man, Delbert battled with drug addiction, but attributed the sudden and rapid turning-around of his life to God and renewed his walk of faith. Although he was not proud of his struggles during his younger years, he never failed to use the wisdom gained from his mistakes to minister to, and positively impact those around him. Del was a member of Summit Christian Fellowship. He was devoted to his faith and enjoyed praising the Lord and sharing the gospel through music. Del was a fantastic singer and guitar player, and proud member of the church worship team. Preceded in passing by his sister, Mary Catherine Hill, Del is survived by his son, Michael Hill; daughter, Jennifer Stewart; sisters, Patsy Venegas, Billie Swanson, and Reina Andrews; brother, Ronald Hill; grandson, Damien Stewart; and granddaughter, Savannah Stewart. Memorial services will be held privately. In lieu of flowers, memorial contributions may be made in Del’s name to Summit Christian Fellowship, 414 South Curry Street, Tehachapi, Calif. 93561. Funeral arrangements are entrusted to the care of Wood Family Funeral Service in Tehachapi, Calif.

Delbert Hill, 58, of Tehachapi, Calif., passed away on July 6, 2020. He was born on August 24, 1961 in Memphis, Tenn. to Cullie Clayton Hill, Jr. and Sue Hill. A longtime resident of Tehachapi, Del worked in the community at several local... View Obituary & Service Information

The family of Delbert Hill created this Life Tributes page to make it easy to share your memories.

Send flowers to the Hill family.