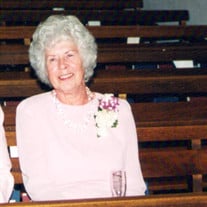 OBITUARY Eileen Janice Clemmons 1925 – 2019 Our Mom, Grandma, and Grams; God gave her to us so that we would know Love! Eileen Janice Clemmons, age 93, cherished mother, grandmother, great-grandmother, and sister passed away at her daughter’s home in Tehachapi, on January 15, 2019. She was born on October 31, 1925, on her grandparent’s farm in Brae Valley, Wisconsin, to parents, Alfred William Louis and Edna Alma (Bredlow) Buchholz of Ontario, Wisconsin. Eileen was one of six children born of that union. In 1943, Eileen graduated class salutatorian from Norwalk High School, Norwalk, WI, and then worked at Camp McCoy, Sparta, WI. After WWII, she moved to San Luis Obispo, California. In May 1948, Eileen attended a dance at the Hollywood Palladium where she met her future husband, Jack Clemmons, who was recently discharged from the Navy. Jack took every opportunity to "court" Eileen; and on October 22, 1948, they were married and moved to LA. In 1951, they settled in Reseda where their two children, Nina and John, were born. Eileen was active in the Shirley Avenue Elementary School PTA and a long-time member of Christ the King Lutheran Church in Van Nuys where she taught Sunday School. In the early 1970's Eileen went to work for Security Pacific Nat’l Bank as a telephone operator. Soon she was offered an entry level position in Operations. During her 20 years with the bank she was promoted to Branch Specialist and Assistant Manager before retiring. She was well liked and respected by her co-workers and customers. Eileen and Jack were enthusiastic members of the Valley Dixieland Jazz Club in Canoga Park. They always had a wonderful time listening to the music and dancing together. After 49 years of marriage, Jack passed away and Eileen then devoted the next 15 years to volunteering at the West Hills Hospital gift shop. The profits from merchandise sold funded scholarships that were awarded to local nursing students. In addition, she was also responsible for scheduling the volunteer time slots. Eileen is survived by her daughter, Nina (Rodger) Nelson of Tehachapi; her son, John (Maureen) Clemmons of Reseda; her grandchildren, Mike, Theresa, Francesca, Elizabeth, and Sean; her great-grandchildren, Alexis, Kaitlyn, and Reese; her sisters, Norma Brandau and Vivian Potthast; and her brother, Raymond Buchholz. She was preceded in death by her parents; her youngest brother, Dennis; her husband, Jack; and her sister, Beulah Schell. Eileen was a gentle, sweet, caring, and generous Christian lady who will be greatly missed by all who knew her. She was laid to rest beside her loving husband on January 25th, at Oakwood Memorial Cemetery, Chatsworth, CA. Eileen and Jack are dancing together again in Heaven! Funeral arrangements were made with the assistance of Wood Family Funeral Service. For condolences please visit www.woodmortuary.net.

The family of Eileen Janice Clemmons created this Life Tributes page to make it easy to share your memories.

Send flowers to the Clemmons family.