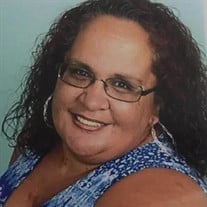 Erica Suzanne Delgado Alamillo 1979 – 2018 On the clear, crisp night of January 3, 2018, Erica Suzanne Delgado Alamillo, 38, peacefully passed to join our Lord after battling ovarian cancer. Erica was born at Tehachapi Hospital, and lived and attended elementary and junior high school in Tehachapi until the age of 12. She finished her education in Lancaster at Antelope Valley High. She attended Clarita Career College and obtained her Administrative Medical Assistant Certificate in 2005. Erica moved to Tehachapi and eventually relocated to California City, where she raised her family for the last 10 years. Erica was a dedicated mother of two beautiful children, Tony (16) and Angel (10), and a loving wife to Raul Alamillo Jr. Erica’s passion was taking care of her children. Erica’s love of animals included fostering many dogs until a new owner could be found. In 2012, she adopted a puppy named Dallas, a chocolate lab who loved to be at her side. Erica enjoyed get-togethers with family and friends, as well as working on many crafts, including cross-stitch and knitting. Erica was always helping others in need, taking many friends and family to doctor’s appointments or helping out in a pinch. Known for her big heart and warm smile, she was a wonderful daughter, sister, granddaughter, and friend. Erica is survived by her husband, Raul; son, Tony Delgado; daughter, Angel Alamillo; mother, Mary Dimond and stepfather, Mark; father, Robert Delgado; sisters, Connie Delgado (Carlos Perez) and Cheree Delgado (Ian Meyers); nieces and nephews, Robert Amaya, Ariela Montano, Rebecca, Esmerelda, and Samuel Perez, Aison and Zoey Aguirre, Eli Meyers; and maternal grandmother, Joyce Hawkins. She was preceded in death by grandfather, Tom Hawkins. Services were held on Thursday, January 11, 2018, at St. Malachy Catholic Church in Tehachapi. The family would like to express their thanks for the many acts of kindness during this difficult time. Erica will be missed by all. Funeral arrangements were made with the assistance of Wood Family Funeral Service. For condolences please visit www.woodmortuary.net.

The family of Erica Suzanne Delgado Alamillo created this Life Tributes page to make it easy to share your memories.

Send flowers to the Alamillo family.