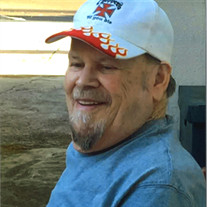 Ernest Edward Harris, Jr. 1943 – 2019 Ernest Edward Harris, Jr. of Tehachapi, CA, peacefully passed away at home on April 13, 2019. Born to parents, Ernest Edward Harris, Sr. and Bonnie Lynn Harris, on August 6, 1943, in Santa Maria, CA. Growing up, Ernest moved all around the country, eventually maintaining residence in California. He loved animals and was an avid horseback rider. He was even known to raise birds in his bathtub. Ernest dearly loved his dogs. He enlisted in the Navy, served our country, and was honorably discharged from active duty in 1962. Ernest married the love of his life and best friend, Letha Harris, on March 1, 1986. They moved to Tehachapi in 1989, where they raised their beautiful family. The small town feel and the weather were a couple of things that Ernest enjoyed about living in Tehachapi. He spent his career as a truck driver, but loved riding Harley’s, raising birds, doing mechanical work, and cooking in his spare time. He especially loved spending time with his family. While Ernest loved to cook things like tacos, he also had a love for all different kinds of food. He was not picky by any means, and loved anything from crab, sushi, Chinese food, and Mexican food, to sweets, like donuts that Letha would sometimes bring him. Ernest also liked music. He really enjoyed listening to Whitney Houston, Phil Collins, oldies, and country. His favorite sports were racing and boxing. Often, he would have the race turned up so loud that it felt like you were there at the track. He will be remembered by his good sense of humor, practical jokes, how protective he was of his family, and how he never took nonsense from anybody. Ernest was preceded in death by his parents, Ernest E. Harris, Sr. and Bonnie L. Harris; grandparents, Violet Fox and Edmond Meeks; uncle, Charles Meeks; and his Grandma and Grandpa Harris. He is survived by his loving wife of 33 years, Letha Harris; sister, Mary Mathis; brother, Richard J. Harris; and his children, Caroline, Todd, Richard, Anna, Misty, Jamie, Elizabeth, Jerimiah, and Amber; his 18 grandchildren; and 6 great-grandchildren, as well as many more family members and friends. A viewing will be held on Sunday, April 21, 2019, from 6:00 to 8:00 p.m. at Wood Family Funeral Service, 321 West F Street., Tehachapi, CA. A second viewing will be held at 9:00 a.m. on Monday, April 22, 2019, also at Wood Family Funeral Service, immediately followed by a funeral service at 10:00 a.m. Interment with military honors will be held at Bakersfield National Cemetery following the funeral service. Wood Family Funeral Service was entrusted with his care. For condolences please visit www.woodmortuary.net.

The family of Ernest Edward Harris Jr. created this Life Tributes page to make it easy to share your memories.

Send flowers to the Harris family.