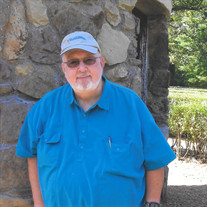 Gary Wayne Ramey 1944 – 2018 Gary Wayne Ramey was born to James Vernon Ramey and Omega Margaret Barnard in Glendale, CA, on February 6, 1944. He is survived by his wife of more than 52 years, Melinda Anne (Carter). He leaves a daughter, Cinthia Jeanne LeClare of Roseburg, OR, and a son, Christopher Wayne Ramey of Spokane, WA. He has eight grandchildren from his daughter and two grandchildren from his son. There are also two great-grandsons. Gary was preceded in death by his parents; two brothers, James and Kenneth; and a sister, Barbara Sage. All three siblings were born in Joplin, MO. The family moved to the L.A. area in 1942. He attended Eagle Rock High School from 7th through 12th grade, graduating in 1961. Gary married Jeanette Lostutter. He enlisted in the U.S. Air Force and went on to become an air traffic controller, being stationed at Bunker Hill Air Force Base in IN, from 1962 – 1965. During this time, his daughter Cinthia was born. After discharge from the Air Force, he moved to Pasadena and in November 1964 married Melinda. He went to work at the Federal Reserve Bank in Los Angeles until 1968, when the FAA hired him to work at the Air Traffic Control Center in Palmdale. He left that job in 1981 and went to school to become a computer programmer. After graduating, he worked for an insurance company in North Hollywood as Operations Supervisor as well as programmer. Leaving that job in 1992, he went to work for H&R Block in Lancaster and Tehachapi until 2018. Gary’s off-time pleasures included genealogy, weather, and travel. He was president of the Antelope Valley Genealogical Society for five terms, as well as being treasurer for several years. While in high school, he became interested in keeping weather records, a hobby he has continued throughout his life at locations where he lived. His travel included forty-nine states, only missing Hawaii. Foreign travel included Mexico, Canada, and Great Britain. His favorite travel place: SCOTLAND. Like the weather records he kept, he also recorded extensively their travel experiences. Gary also wanted to mention his lifelong friend, David Cooper of Temple City, CA. They met when they were only two years old and kept their friendship throughout their lives. The only time they were not in contact was during their Air Force days. Burial is planned for 2 p.m. on September 14, 2018, at Bakersfield National Cemetery, 30338 E. Bear Mountain Blvd., Arvin, CA. Funeral arrangements were made with the assistance of Wood Family Funeral Service. For condolences please visit www.woodmortuary.net.

Gary Wayne Ramey 1944 &#8211; 2018 Gary Wayne Ramey was born to James Vernon Ramey and Omega Margaret Barnard in Glendale, CA, on February 6, 1944. He is survived by his wife of more than 52 years, Melinda Anne (Carter). He leaves a daughter,... View Obituary & Service Information

The family of Gary Wayne Ramey created this Life Tributes page to make it easy to share your memories.

Send flowers to the Ramey family.