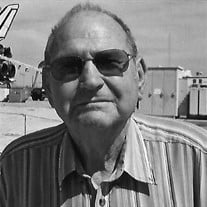 George Noel Grimshaw 1933 – 2018 George Noel Grimshaw, age 85, passed away on the morning of July 13, 2018, following a short illness. His viewing will be held on Friday, July 20, 2018, at 4:00 p.m. at Wood Family Funeral Service in Tehachapi. Graveside service and interment will be at 10:00 a.m., Saturday, July 21, 2018, at the California City Memorial Park. Pallbearers will be his grandsons George Elliot, David, Brandon, Wesley, Wyatt, and Wade Grimshaw. A memorial service is planned for Saturday, July 28, 2018, at 11:00 a.m., at Victory Baptist Church, in California City. Pastor Ron Smith will officiate both services. George was born on January 11, 1933, in Elida, NM. He was the second child of George Olan and Vida Grimshaw. He grew up working on the family farm and dairy. He graduated from Elida High School in May 1951, and enlisted in the U.S. Air Force, where he served in Japan during the Korean War. Upon returning home, he became a barber and settled in Lovington, NM. There he met a young teacher from Texas named Patricia Ann Howard. They were married on June 4, 1957. They had three sons George (Howard), Rodney, and Larry. In 1965, the family moved to Elida to live so George could attend Eastern New Mexico University (ENMU). He graduated from ENMU on August 1, 1969, with his bachelor’s degree. George and Pat then moved their family to California City, CA, where George taught 5th grade at Robert P. Ulrich Elementary School from 1969-1994. During his teaching career, “Mr. G” taught over 600 fifth grade students. George became a Christian at the age of 10, when he placed his faith in the Lord Jesus Christ as his Savior. He was a member of the First Baptist Church in Elida, Jackson Avenue Baptist Church in Lovington, NM, and First Baptist Church in California City where he served as a Children’s Sunday School Teacher and Deacon for many years. He was also a charter member and served as a Deacon at High Desert Bible Church in California City for several years. George was preceded in death by his parents, an older brother, Charles; a younger sister, Teresa, and her two sons; his son, Rodney. He is survived by his wife, Pat of California City; son, George Howard (Theresa) of California City; son, Larry of Tehachapi, CA; brother, Thad (Cecilia) of Durham, NC; seven grandsons, and six great-grandchildren, as well as several cousins, nieces, and nephews. George loved visiting and helping people, never meeting a stranger. His hobbies included genealogy, gardening, collecting memorabilia and books reading, traveling, and going to garage sales. He was loved by all that knew him and is greatly missed by his family, friends, and former RPU and Sunday School students. Flowers may be sent to 17150 Hacienda Blvd., California City, CA, or donations made to the charity of your choice.

The family of George Noel Grimshaw created this Life Tributes page to make it easy to share your memories.

Send flowers to the Grimshaw family.