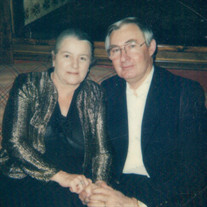 Harold E. Stewart 1921 – 2017 Harold E. Stewart, 96, passed away on Thursday, July 20, 2017, at home peacefully in his sleep, after spending the day with family and friends. He was born on May 29, 1921, to parents William Henry Stewart and Mae Elizabeth Stewart in Mount Vernon, MO. He served his country during WWII, in the U.S.A.A.C., as well as the U.S.A.F. as a Sergeant, in the China-Burma-India Theatre. He was decorated for his service in the 444th Bombardment group. After his military service, he was employed by General Electric as a very accomplished aircraft instrumentation engineer. He enjoyed maintaining and driving classic cars, especially old Lincolns. He also enjoyed traveling in motorhomes, seeing all 48 contiguous U.S. states, and he loved dogs. Harold was a loving, caring, compassionate, and generous man; a true gentleman. He is now reunited with his loving wife of 56 years, Josephine “Joyce” Stewart, who preceded him in death in July of 2007; as well as his two sisters, Ruby and Helen. He is survived by his sister, Martha Smith (Jack) of Springfield, MO; daughters, Kay Beatty (Leon) and Linda Brown (George); sons, Gene Stewart (Cindy) and Jeff and beloved daughter-in-law, Susie Stewart; six grandchildren, Gary, Michael, Jeffrey, Christopher, Lindsay, and Morgan; 15 great-grandchildren; three great-great-grandchildren; and numerous nephews and nieces. The family would like to thank very special neighbors and great friends, Geri, Neya, Willie, Roger and Pauline, and Ron and Doris, for always being there for Dad; and Optimal Hospice, Theresa, Yvonne, Heather, and Michelle, for the excellent, compassionate care. He will be missed by all who knew him. A viewing will be held at 9 a.m. on July 27, 2017, at Wood Family Funeral Service, 321 West F St., Tehachapi, CA. Interment will follow at 10:30 a.m. at the Tehachapi Public Cemetery - Eastside, 820 Burnett Rd., Tehachapi, CA. Arrangements were made with the assistance of Wood Family Funeral Service. For condolences please visit www.woodmortuary.net.

The family of Harold E. Stewart created this Life Tributes page to make it easy to share your memories.

Send flowers to the Stewart family.