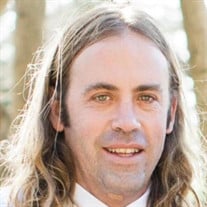 James Clinton Davies, age 45, passed away on June 15, 2022, in a car accident near his home in Rosamond, CA. Clint was born in Charlottetown, Prince Edward Island, Canada on February 23, 1977, to James Arthur Davies (née Philip Wayne Holm) and Dianne Margaret Deveau. Clint grew up in Thousand Oaks, CA. He could often be found running around with his friends, skateboarding, listening to music, playing video games, or reading encyclopedias learning about anything he could, particularly history and politics. He was an Eagle Scout and was always proud of this accomplishment. He attended Thousand Oaks High School, graduating in 1995. He then served a mission for his church in Tampa, FL from 1996 to 1998. He studied Political Science at both Utah Valley State College and the University of Utah and avidly followed politics his entire life both locally and worldwide, even running for a seat on Tehachapi City Council in 2018. Clint was incredibly intelligent and was frequently sharing his knowledge with others. He was a man with a big heart and a desire to be an advocate for the underdog, including his beloved rescue dog, Luke. He was a son, a brother, an uncle, and a loyal friend. He will be truly missed. Clint is survived by his mother, Dianne Duncan; stepfather, Ronald Duncan; siblings, Chris Davies (Sandra), Cheyenne Autumn, Lauren Heal (Jared), and Lindsey Rosche (Nick); 9 nieces and nephews, Summer, Rosie, Logan, Tyler, Lyla, Ray, Lena, Skylar, Zane; and many aunts, uncles, cousins, and dear friends. He was predeceased by his father, James Davies; uncle, Glenn Deveau; and grandparents. A celebration of life will be held on August 6, 2022, in Thousand Oaks, CA. In lieu of flowers, please consider the underdogs in your world and pay it forward in any way you can just as Clint would have done.

The family of James Clinton Davies created this Life Tributes page to make it easy to share your memories.

Send flowers to the Davies family.