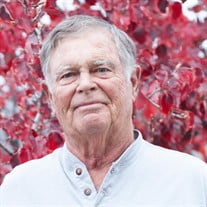 Celebration of Life – Jim Moore James D Moore, 72, passed peacefully at home among family on March 16, 2021. He was a devoted husband, father, grandfather and friend. Jim loved his God, family and country. Jim was born in Los Angeles, Ca. to Uarda and Jim Moore, the oldest of two children. He grew up in Van Nuys, Ca. Jim was a very gifted, athletic boy, playing baseball in elementary school with dad coaching the team. Jim’s dad worked for Farmers Insurance Group and in 1964 the company relocated the family to Pocatello, Idaho. Jim continued playing baseball, graduating from Pocatello High School and was awarded the school letter in baseball for season 1965-1966 when he graduated. Jim enlisted in the Navy in 1967. First stationed in Los Alamitos and the following year at US Naval Air station in Lemoore, Ca. He was assigned to the U.S.S. Enterprise, an aircraft carrier. It was on Jan 14, 1969 that disaster struck the Enterprise while the crew was doing the ship’s final exercise before it’s reassignment to Vietnam. Many lives were lost and many were injured, Jim being among the latter. He received an Honorable discharge in 1970. He loved his country and was proud to serve, was a Veteran. Jim’s career with Farmers Insurance Group spanned over 35 yrs. He was an ambitious, hard worker, with an extensive commercial background, and was promoted to the top as the Los Angeles Regional Office Commercial Manager. In 1993 he took over the entire Commercial Department for the combined LA/Simi Region. This was his last promotion until retirement in 2004. He also found time to coach our company co-ed softball team. Jim and I met at work in 1991 and married a few years later. We bought a new home in Oxnard and lived there for 8 years, taking a company van to work in Simi Valley. We moved to Bear Springs in August 2001, still working for 2+ years, catching the company van in Lancaster to Los Angeles for a year, and then Simi Valley for our last year. Because he was an ambitious man with a retirement plan we were able to retire in February 2004 in paradise. We have lived in this beautiful community for over 19 years. The first thing we did when we retired was go to the ball field and join the Senior softball team. Loving the country Jim’s hobbies included riding and camping with our horses, liked the goats, loved the dogs, was a terrific cook, so the kitchen was his. He liked working around the house, loved his family. Played gold and of course softball. In 2014 Jim moved his parents here from Ventura. They enjoyed living here until their passing, dad in 2016 at 89 and mom in 2018 at 93. They also rest at the National Cemetery Bakersfield. Jim’s dad was a WWII Vet. His plaque is displayed at the Veterans Memorial at Cub Lake. Thank you BVS Veterans Association. Jim is survived by his wife, Mary Ann; son James, wife and 3 children; son Jason, wife and 3 children; daughter Kristin and 3 children; sister Darlene, her husband Mike, their 2 daughters and their families. Jim, your time on earth is through. You have lived a wonderful life here in Tehachapi. You are at peace with the Lord, your Savior. Your family will miss you and pray for you always. We love you. The family would like to extend their appreciation to Bristol Hospice Care Team for your comfort and care of our loved one. Thank you to Bear Valley Springs Veterans Association for all you are doing for Jim and our family. I know the service will be unforgettable with you doing the honor. In lieu of flowers, please consider donating to St. Jude's Hospital, whom James regularly donated to.

The family of James Dennis Moore created this Life Tributes page to make it easy to share your memories.

Send flowers to the Moore family.