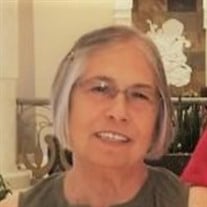 On Sunday, November 7, 2021, Jayne Ellen Whittaker-Scardello passed away after battling many years of chronic illness to be reunited with her loved ones in heaven. Jayne will be remembered for her no-nonsense way of looking at the world we live in as well as the people, organizations, and charities she so intensely supported throughout her life. Jayne will be remembered by her husband, Mike Scardello, three children (daughter, stepdaughter, and son), six grandchildren, three great-grandchildren, and by numerous friends and members of the organizations she worked so hard for over the years. She was preceded in death by her Father, Mother, Sister, and Brother. Jayne has supported many charities over the years, which include the Daughters of the American Revolution, the Mayflower Society, and the American Legion. As a certified Genealogist, Jayne can trace her family back to the time of the American Revolution which qualifies her to be a member of the National Society, Daughters of the American Revolution (DAR). As a DAR member in Tehachapi, she joined the Tomo Khani Chapter of the DAR in the early 2000s. During this period, she has served as the Chapter Registrar, Vice Regent, and Regent. During this period, she also served as the Regent of the Antelope Valley Chapter of the DAR. Jayne was also able to trace her ancestry back to members of her family who came to America in the 1600s and settled in Plymouth. She was, therefore, qualified to join the Mayflower Society and did. While visiting her family in Massachusetts she was able to visit the home of the Mayflower Society and the graves of those relatives that were in her lineage. Her dedication to the military is seen in her support of the American Legion. She supported many functions at the Veteran’s Hall in Tehachapi. With all of this, Jayne maintained a career of Managing Book Stores in Lancaster as well as being a Data Technician at the NASA Dryden Flight Research Center (now Armstrong), supporting the engineers who performed important testing on a variety of aircraft. Jayne was a generous person supporting many things in her life and will be missed by many in her life, not the least of which is her husband, Mike. She has specifically asked for there to be no formal service in her name and that anyone who wishes to honor her for her life, please donate in her name to the many charities she supports including the many Veteran support organizations that exist today.

On Sunday, November 7, 2021, Jayne Ellen Whittaker-Scardello passed away after battling many years of chronic illness to be reunited with her loved ones in heaven. Jayne will be remembered for her no-nonsense way of looking at the world we... View Obituary & Service Information

The family of Jayne Ellen Whittaker-Scardello created this Life Tributes page to make it easy to share your memories.

Send flowers to the Whittaker-Scardello family.