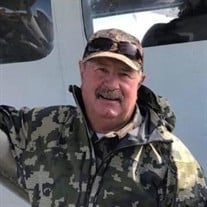 Family and friends were deeply saddened by the sudden and unexpected death of Jerry Johnson on March 24, 2022. Jerry was born and raised in Tehachapi, California on October 13, 1955. He graduated from Tehachapi High School in 1972 and went to work for Monolith Cement Plant where he learned all phases of the cement industry. After 17 years, he and his partner formed a refectory company and he traveled throughout the states selling his product and supervising its implementation. More recently they branched out into many areas of the solar and wind industry. An all-around outdoorsman Jerry rodeoed, team roped, hunted, and fished. He and his numerous old friends loved to get together and share stories of their rodeo days and hunting the mountains of Tehachapi. One of his greatest joys was helping young hunters bag their first deer or bear. Family vacations were often centered on visiting old friends and fishing in Alaska or off the coast of Mexico. More importantly, Jerry loved his family and friends. Afternoons were mostly spent firing up the Traeger, barbecuing something, and calling family and friends to gather around his arena to rope and eat. He was a loving grandpa, always ready to take the kids for rides on his horses, quads, or sneak them off to buy ice cream if he hadn’t made it himself. Jerry was preceded in death by his father Larry Johnson, and sister Cheryl White. He is survived by his mother, Helen Johnson, and a well-blended family including his loving wife of 24 years, Lani Johnson; sons, Larry Johnson and Conn OHalloran; daughters, Julie Cox, Jehri Montoya, and Melia Dishion; and nine precious grandchildren. They will all miss his smiles, love, and laughter, but will also agree that Jerry Johnson lived his life to the fullest including his acceptance of Jesus as his Savior.

Family and friends were deeply saddened by the sudden and unexpected death of Jerry Johnson on March 24, 2022. Jerry was born and raised in Tehachapi, California on October 13, 1955. He graduated from Tehachapi High School in 1972 and went... View Obituary & Service Information

The family of Jerry Michael Johnson created this Life Tributes page to make it easy to share your memories.

Family and friends were deeply saddened by the sudden and unexpected...

Send flowers to the Johnson family.