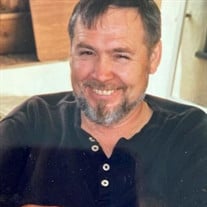 JIMMIE "PETE EARL ABBOTT was born July 22, 1953, in Mojave, California to Jimmie Jewel and Mary Ruth Abbott. He was the apple of his parent’s eye and was soon followed by his only sibling Brenda Ruth a year later. Pete had an entrepreneurial spirit from an early age, his first job was shooting birds out of the orchards at the age of 10. As a teen, the family moved to Frazier Park, and he nurtured his natural talent as a musician. He mastered the bass, guitar, piano, and vocals. He fined-tuned his talents while playing with his parents in the band “The Abbott” and were a local favorite. Pete was known for his humor and zest for life. He married and had two daughters, Stephanie (1980) and Shannon (1983). He loved nothing more than being a father. Pete continued his musical ambitions by playing music with his cousin, Willie Mulliniks in several rock n roll bands. In the 90s, Pete moved to Northern California where he finished his education in water treatment and went on to a flourishing career in several water districts in the Bay area. Throughout this time, his family continued to grow to include his grandchildren who he loved and adored, IyLeena, Lorraina, Rudy Jr, Logan, and Jalen. Jimmie also left his rock n roll roots and replaced them with Christian music. He played on numerous worship teams throughout the Bay Area. Upon retirement, Pete and his wife, Kat, moved to McCloud, California, to be near his beloved Uncle Dave and Aunt Susanne Abbott. They fit right into the local vibe and attended Calvary Christian Center. Pete was involved in outreach in the McCloud community and made fast friends with the locals. Pete hunted and fished his whole life. As a young man Pete and his dad would hunt every deer season, even plan trips out of state to hunt elk. He loved fishing, and as Stephanie and Shannon aged, he shared the sport with them, bonding over family fishing trips. The constant throughout his life was music. He was truly a gifted musician and influenced many people through his talents. He also loved the Lord, becoming a Pastor in 2021. His passion for sharing the gospel was unsurpassed. Pete always had a smile on his face and a joke on his lips. He will be missed dearly. Pete is survived by his wife, Kat; daughters, Stephanie Zevallos (Rudy), Shannon Grayburn (Randy), and Betina Messer; grandchildren, Iyleena, Lorraina, Rudy Jr, Logan, and Jalen; sister, Brenda McVay; niece, and great-nephews, Sunshine, Kameron, and Quinton Matthews, as well as numerous loving family and friends. ~~

JIMMIE "PETE EARL ABBOTT was born July 22, 1953, in Mojave, California to Jimmie Jewel and Mary Ruth Abbott. He was the apple of his parent&#8217;s eye and was soon followed by his only sibling Brenda Ruth a year later. Pete had an entrepreneurial... View Obituary & Service Information

The family of Jimmie Earl "Pete" Abbott created this Life Tributes page to make it easy to share your memories.

Send flowers to the Abbott family.