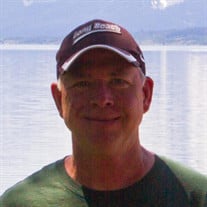 John Thomas Bosworth, 59, of Tehachapi, Calif., passed away on Wednesday, April 22, 2020 after a courageous battle with lung cancer. He was born on April 18, 1961 in Bismarck, North Dakota to Donald and Tillie Bosworth. When he was accepted for an internship opportunity with NASA at the early age of 19, he moved to Lancaster, Calif. On his first day, he met the love of his life, Connie. It was the first day of her internship, too. John dedicated his career to federal service and served 36 proud years with NASA as an aerospace engineer. John loved working on large, complex experimental flight research projects including the X-29 and international X-31. He very much enjoyed mentoring new engineers and many of his co-workers admired his calm during turbulent times. John and Connie moved to Tehachapi in 1991 where they raised two children, Jessica and Sean. His children meant everything to John, and he was so proud of them. Throughout his life, he enjoyed traveling with his family, especially to national parks. Yellowstone National Park was one of his favorites. Many fond memories were made taking the trailer to go camping and kayaking in the most beautiful destinations our country has to offer. He loved the outdoors. At home, you could always find John puttering around outside doing projects, yardwork, or simply watching the native birds at his birdfeeder. John was also a tried and true Minnesota Vikings fan. John was preceded in passing by his parents; brother, Joe Bosworth; sister-in-law, Diane Silbernagel; father-in-law and mother-in-law, Johnie and Billie Jean Simmons; and brother-in-law, Stephen Simmons. He is survived by his loving wife of 32 years, Connie Bosworth; daughter, Jessica (Eric) Kircher; son, Sean Bosworth; siblings, Ernie Silbernagel, Ray (Sharon) Bosworth, Myron (Linda) Bosworth, Carla (John) Bergmeier, Pat (Alan) Libra, Brenda (Michael) Hove, Tim (Brenda) Bosworth, and Marc (Sarah) Bosworth; and many nieces and nephews. A Celebration of Life will be held at a later date. Memorial Contributions may be made in John’s name to the National Parks Conservation Association (NPCA). Funeral arrangements are entrusted to the care of Wood Family Funeral Service in Tehachapi, Calif.

John Thomas Bosworth, 59, of Tehachapi, Calif., passed away on Wednesday, April 22, 2020 after a courageous battle with lung cancer. He was born on April 18, 1961 in Bismarck, North Dakota to Donald and Tillie Bosworth. When he was accepted... View Obituary & Service Information

The family of John Thomas Bosworth created this Life Tributes page to make it easy to share your memories.

John Thomas Bosworth, 59, of Tehachapi, Calif., passed away on...

Send flowers to the Bosworth family.