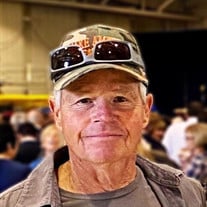 John Martin Hayes, 12/1/48 - 1/13/2021 John Martin Hayes was born in Bakersfield, California on December 1,1948, to Margie Mary Hayes and John McConnell Hayes. After graduating from Foothill High School in 1966, John joined the U.S. Army, serving in Germany during the Vietnam War. After his term of service, he attended California State University, Bakersfield, where he earned a Bachelor of Science in Biology. John married Charlotte (Margo) Wilson in 1974 and several years later they moved from Bakersfield to Atascadero where John worked for a pension firm. In 1987 they moved to Tehachapi, CA where John drove a ready-mix truck, worked seasonally for Caltrans, managed several cement plants as a control room operator, and later became the senior Air Control Specialist for the Eastern Kern APCD. Throughout his entire career, John’s hard work ethic and responsibility were evident. Those close with John would say he knew a little bit about everything. He could strike up a conversation with anyone to find common ground. His children often grumbled over his reluctance to leave church or a social gathering because he was so engaged in conversation with other people. John was genuinely interested in other people’s stories and enjoyed learning new things up until the end. He was an avid cyclist and enjoyed riding in century bike rides, including one on his 70th birthday. He loved working out at the gym, listening to classic rock music, hiking to the top of Tehachapi Mountain Park, hunting, and just about any outdoor activity. John’s personal faith in Jesus Christ as his Savior led him to actively serve in Country Oaks Baptist Church, and later in Roots Christian Fellowship. He enjoyed taking several of his children on mission trips. He served in Mexico, Mississippi, and more recently, he chaperoned a mission trip to Moldova with his son’s youth group. In Moldova, John experienced the joy of sharing the gospel of Jesus Christ. For the last year of his life, John fought cancer valiantly. He never complained. Finishing his race well, he loved and served his wife and family, worked on home projects, and spent precious time with dear friends. John is survived by his wife, Margo, and his six children; Nathan Hayes, Joseph Hayes, Hillary Leonard, Caleb Hayes, Kirsten Neighbors, and Andrew Hayes. He is also survived by 12 grandchildren; Alexander Coghlan, Madalyn Hayes, Josie Hayes, Hallie Hayes, Gunnar Hayes, Cosette Leonard, Chaucer Leonard, Tennyson Leonard, Addison Neighbors, Declan Neighbors, Emilia Neighbors, and Grayson Hayes. He will be buried at the Bakersfield National Cemetery with honors. A memorial service will be planned for mid-February with details TBD.

The family of John Martin Hayes created this Life Tributes page to make it easy to share your memories.

Send flowers to the Hayes family.