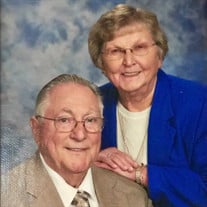 John Francis Mihelich 1927 – 2019 John Francis Mihelich, 91, passed away peacefully on Monday, March 11, 2019, following a brief illness. He was preceded in death by his wife of 63 years, Helen (Jankila) Mihelich and survived by their five children; sons, John, Mark, and Bob, and daughters, Jodi and Mary Beth (Sam); his brother, Bruce; eight (8) grandchildren; two (2) great-granddaughters; and many close friends. John (aka Jack, Jake, Mickey) was born and raised in Laurium, MI, and after marrying the love of his life, Helen, relocated to Southern California, where he remained throughout the rest of his life. In his very early years, John would shine shoes for a nickel and deliver newspapers to help the family out. After graduating from High School, and a brief service in the Navy, he attended Northern Michigan University and graduated in 1952, with a bachelor's degree in Business. He met his wife, Helen in high school when he was 16 and she was only 15, their first date was a high school dance. They never looked back and were married in 1951. After relocating to Southern California in 1953, John entered the Aerospace Industry, and held significant positions over his 38-year career with Northrop and Rockwell. Shortly before retirement in 1991, John and Helen built their “dream” home in Bear Valley Springs Tehachapi, which he resided in until his passing. John had passion for many things, such as reading, politics, continuous learning, sports, and playing golf; but what he really cherished was his family and friends. He was loved by many and will be missed. A funeral service will be held at Wood Family Funeral Home on March 23, 2019, at 1 p.m., with a reception immediately following at the family home. A Celebration of lives (John and Helen's) will be held at a later date in the Los Angeles/Orange County area. In lieu of flowers, the family is requesting that donations be made to Shepherd of the Hills Church Wood Family Funeral Service was entrusted with his care. For condolences please visit www.woodmortuary.net.

John Francis Mihelich 1927 &#8211; 2019 John Francis Mihelich, 91, passed away peacefully on Monday, March 11, 2019, following a brief illness. He was preceded in death by his wife of 63 years, Helen (Jankila) Mihelich and survived by their... View Obituary & Service Information

The family of John Francis Mihelich created this Life Tributes page to make it easy to share your memories.

Send flowers to the Mihelich family.