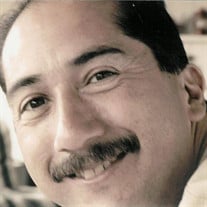 Joseph “Richard” Perez 1959 – 2017 Richard went to be with his Lord and Savior and heavenly family on July 16th, while his family stood by his side. Richard’s life would seem too short to many, but those who were touched by him understood the quality of existence far exceeds the quantity of time in which one lives. He is survived by his loving wife, Sherrie; daughters, Melody and Desirae; and his son-in-law, Andrew Scott of Tehachapi, California; as well as his granddaughters, Madison, Makaylie, and Malia Howell, and Penelope Scott; and his sister, Lisa Hobson of Neosho, Missouri. He was preceded in death by his parents, Henrietta Perez and Jose Gonzales. Richard was born in Los Angeles, California, in 1959, and raised in the Southern California area. He went to work for the Department of Corrections in 1981, and after a lengthy career recently retired in 2016. He met the love of his life, Sherrie, while working together at the prison in Chino. They moved to Tehachapi and have lived there for the last 27 years, raising their two beautiful daughters and spending precious time with his granddaughters. He loved to take his family on many wonderful adventures. He met many lifelong friends during his career with Corrections. Richard had a love of cooking, baking, grilling, and making his infamous beef jerky. He was always cooking up some wonderful recipes. He was so enthusiastic about his hobby that he entered the Kern County Fair baking competition. His apple pie won first place many years in a row. One of his legacies is his amazing recipes. He enjoyed spending time with his family while fishing, golfing, road trips, finding souvenirs, playing horse shoes, and hanging out by the fire pit. He will be always remembered as a loving Dad and Papa, whose greatest passion was helping others. He held a strong faith in the goodness and grace of God, and faithfully prayed for his loved ones. A service will be held for all who wish to attend on August 18, 2017, at 11:00 a.m. at Wood Family Funeral Service, 321 West F Street, Tehachapi, California. Reception immediately following at The Woods Pavilion. Arrangements were made with the assistance of Wood Family Funeral Service.

The family of Joseph Richard Perez created this Life Tributes page to make it easy to share your memories.

Richard went to be with his...

Send flowers to the Perez family.