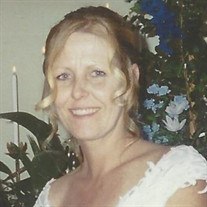 Kathy Lynn Brown 1961 – 2018 Kathy Lynn Brown, 57, passed peacefully on October the 11th of 2018, at UCLA, Santa Monica, after a steadfast battle against cancer. A viewing will be held at 4 p.m. on October 21, 2018, at Wood Family Funeral Service. Her services will be held at Wood Family Funeral Service on October 22, 2018, at 9:00 a.m. and officiated by Brother Johnnie Stevenson. Interment will follow at Bakersfield National Cemetery. Kathy was born to Richard Lee Oxford and Kathryn Diane Oxford in Bakersfield, California on March 16, 1961. She had completed her Associate of Arts at University of Maryland United College. She was married to Mark Lloyd Brown on August 18, 2000, in Lewisburg, Tennessee. Kathy had tirelessly dedicated herself to working in nonprofit organizations for the final 18 years of her life. Her numerous accomplishments beyond her education and work include learning to snowboard on the Swiss Alps, becoming conversational in Germany, and tirelessly raising and caring for her five children and countless surrogate children that she happily acted as a second mother for when needed. Kathy was an avid rancher, raising ducks, chickens, and horseback riding. She also enjoyed water and snow sports, such as skiing and kneeboarding, tubing, snowboarding, and countless others. She was a skilled western dancer, known by many to frequent Trout’s with her husband for their local atmosphere and expansive dance floor. Kathy was consistently involved in several political organizations, including several Second Amendment rights groups, a 2012 presidential local campaign, and had volunteered at local polling stations on numerous occasions. Kathy had lived in several states throughout her childhood and young adult life before making her way back home to California. She also had the opportunity to live in Mannheim, Germany, with her family while her husband was stationed there between 2000 and 2006. During her time there, she was able to tour Spain and Italy. Some of her most notable visits included Barcelona and the Leaning Tower of Pisa. Throughout all her adult life, Kathy was an avid Mustang enthusiast and skilled driver. Kathy is survived by her mother, Kathryn Diane Oxford; her two sisters, Cindy Lou Oxford and Kellie Trulove; her husband, Mark Lloyd Brown; her four sons, Richard Dean Carroll, Russell Anthony-Loren Oxford, Christopher Dale Ternes, and Clayton Dewayne Ternes; her only daughter, Kathryn Lynn Oxford; her daughter-in-law, Vanessa Ternes; her nieces, Heather Greer, Samantha Turknett, Jackie Lynch, and Kellie Phillips; her nephews, Joshua Phillips, Judiah Phillips, and Peter Lynch; her grandkids, Russell Oxford, Hailey Oxford, Raiden Oxford, Dylan Macias, Violet Carroll, Jacob Ternes, Kathlyn Ternes, Austin Ternes, and Riley Jennings; as well as countless aunts, uncles, cousins, great-nieces, and great-nephews. She was preceded in death by her father, Richard Lee Oxford; her paternal grandparents, Kelly Glenn Woolbright and Martha Jane Woolbright; her maternal grandparents, Donald Urban and Ruth Louise Urban; her aunt, Elsie Martine; her uncle, Vernon Martin; her dear friends, John Clayton, Mary Heath, and Steven LaClair; and her beloved horses, Abby, Cinnamon, and Brandy. Donations, in remembrance, may be made to the Tehachapi Cancer Foundation, P.O. Box 766, Tehachapi, CA 93581, that was vital to helping her through this great battle and provided relief when it was so needed. Wood Family Funeral Service, Inc. is handling the arrangements. For condolences please visit www.woodmortuary.net.

The family of Kathy Lynn Brown created this Life Tributes page to make it easy to share your memories.

Send flowers to the Brown family.