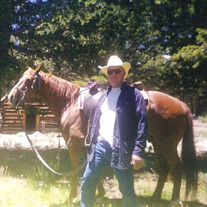 Linzel Ray “Rusty” Snider was no ordinary man. He was a realist, an honest man, a straight shooter, a leader, a brother, a friend to the end, a loving father, the world’s coolest Popo and above all, he was a good guy. Rusty was born in Dexter, Missouri on January 17, 1941, to Clifft and Hazel Snider. The family moved to Tehachapi in 1947 where he happily remained his entire life. He enjoyed a good childhood here in Tehachapi along with his brother Don “Bub” Snider, sisters Delores (Montana) and Roberta (Davis). Rusty graduated from Tehachapi High School in 1959 after which he went to college at Mt. San Antonio Community College to play basketball. After returning to Tehachapi he met and married Evelyn Carol Lortz, his wife and partner in life for 35 years. In 1962 he began his 32-year career at the California Correctional Institution. Rusty was a natural and an icon in his profession. He was solid. As he rose to leadership, he never forgot where he came from. Rank didn’t matter to him. Loyalty, honesty, and people did. Rusty was loved and respected among his co-workers, many of whom have been life-long friends. He treasured the kinship shared among these friends, especially the memories shared at the annual Crowley Lake fishing trip. While the fishing wasn’t always great, the camaraderie shared during this annual gathering was priceless to him. Life after retirement brought happiness, adventure, and challenges. After a heartbreaking divorce, some years later he found a new love and partner in adventure, Marilyn Morphis. Rusty loved camping, horseback trips in the Eastern Sierras, adventure with friends and most of all, family. As his son, I had the privilege of literally living right next door to him nearly all of my life. His two grandsons, Logan and Garett had a path from our house through the grain field between us right to Popo’s door that exists to this day. They grew up with this amazing man in their daily lives and it had an enormous impact on the wonderful young men they have become. He often told me that he lived a fairytale life and simply couldn’t have been happier. Rusty loved his hometown of Tehachapi. Home was here and here is exactly where he always wanted to be. He played sports, coached sports and watched his grandsons play sports here in Tehachapi. Rusty built his house in Brite Valley where he lived until his final day. He passed peacefully and content that he had enjoyed a full and good life saying many times, “I have had a good run.” As many of us do, Rusty faced some daunting health issues as he hit his later years. He never complained. His toughness, iron constitution, love of family and friends and great doctors got him through an unbelievable medical history. He often said, “Getting old isn’t for sissies!” Although he was slowing down, he honestly had a good quality of life right to the end. He was grateful for every second of every day. On December 19, 2019, the world lost one of the finest men to ever live. Unfortunately, there was no time to get this full obituary out prior to services. Hopefully, the message went out to all of those interested in attending Rusty’s memorial service and a celebration of life held on December 28, 2019. The family would like to say thank you to all that came from near and far to honor Rusty. He was the kind of person that made a difference in the lives of many and will be missed by all that knew him. Simply put, he was a good guy.

Linzel Ray &#8220;Rusty&#8221; Snider was no ordinary man. He was a realist, an honest man, a straight shooter, a leader, a brother, a friend to the end, a loving father, the world&#8217;s coolest Popo and above all, he was a good guy. Rusty... View Obituary & Service Information

The family of Linzel Ray "Rusty" Snider created this Life Tributes page to make it easy to share your memories.

Linzel Ray “Rusty” Snider was no ordinary man. He was a realist,...

Send flowers to the Snider family.