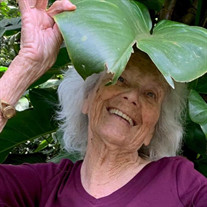 Mary Esther Gordon, endearingly known as “Mum,” “Grandma,” and “Great-Nan” to her seven children, seventeen grandchildren, thirty-one great-grandchildren, and six great-great-grandchildren, was born on December 24, 1927 in Heathfield, Devon, England to James and Lillian Wright. There she found her first love of gardening as a small child. During World War II, she met and married an American Sea Bee. In 1958, she left her beloved England and spent years traveling around Europe with her husband and children before moving to the United States. Mary had a few different jobs, but most remember her as a beloved preschool teacher who spent 25 years devoted to teaching children before “retiring” at the young age of 78. Everyone who knew Mary knew that her retirement was not the end of her life-long work ethic. When Mary moved to Tehachapi, Calif. to live with her daughter, Sandy Gazelle, she found plenty of time to garden, make new friends at church, travel, and spend time with family. At the age of 91, Mary climbed 127 steps to kiss the Blarney Stone in Ireland. At 92, she checked another trip off her list when she traveled to Hawaii. Many will remember Mary as a wonderful artist, and an energetic, humorous, quick-witted, and very British (proud, respectful, patriotic, dry-humored) yet American woman. Her love for her country and the Lord never dwindled. Her feet never hit the floor in the morning before reading her Bible. She only planned each day after asking her “friend” (the Lord) for affirmation. An example of this daily conversation would sound something like this. Mary would ask, “Can I go down and work in the garden today?” Her friend would reply, “No, not today.” Mary would proceed to ask several more times, but He still said, “No.” It was finally at that point that she would think, “So I won’t be working in the garden today.” (Did we fail to mention that Mary was persistent and stubborn?) One could write a book with the stories of her life, especially those describing her memories of the old days and unforgettable experiences of World War II. But in all of her wisdom, the one thing she would recommend that you always remember is that “There is nothing that can’t be cured with a cup of hot black tea!” Mary endured the affliction of the passing of her sons, Barry Gordon and George Gordon; sister, Ivy Wright; and brother, Gordon Wright. She will be dearly missed by her children, Robert Gordon (Jan), Sandra Gazelle, Leslie Calomeris (Jimmy), Patrick Gordon (Julie), Andrew Gordon (Michelle); daughter-in-law, Susan Gordon; brother, David Wright; sister, Sylvia Saunders (Derrick); seventeen grandchildren; thirty-one great-grandchildren; six great-great-grandchildren; and her “bonus sons,” Don Vanpraag and Joe Bowman. Funeral arrangements are entrusted to the care of Wood Family Funeral Service in Tehachapi, Calif.

The family of Mary Esther Gordon created this Life Tributes page to make it easy to share your memories.

Send flowers to the Gordon family.