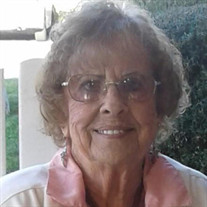 It saddens our hearts to announce the passing of Mary Ellen Nichols. Our amazing and beloved Mom, Sister, Grandma, Great-grandma, Aunt, Cousin, and FRIEND. Mary was born in Fort Worth, Texas on November 20, 1929. She was raised in Pomona California, and graduated from Pomona High School. During her high school years, she volunteered as a candy striper in her local hospital and helped raise her younger siblings. She loved to make people smile, and laugh. She would do anything for you. She never complained. She always said please, thank you, God Bless, wherever she went. Later, Mary married the love her life, Harvey H. Nichols. They were married on July 3, 1960, for 42 years, before his passing in 2006. Mary was the first women to get heart monitors in the elementary schools for early detection in the 1960s. She held every office in PTA during our schooling years. She and Nicole always enjoyed being around all her sisters in her Sorority, Beta Sigma Phi. Yes !! she held every office there too. She didn’t stop there, she devoted her life to the March of Dimes, “Be good to your baby before it’s born”, she would say. For 37 years she stayed the with the March of Dimes. After the death of their oldest son, Robbie, (He was the first boy to get polio in San Bernardino County, which he overcame), she became the best fundraiser ever! If she wanted it, she didn’t leave without, if it was for the children of March of Dimes. In 2007 Mary Ellen got another calling. This time her devotion was with the KCSD. As a volunteer, she wore the uniform proudly for 15 years until our lord called her home. Mary loved her family, she had a strong faith, she loved to read, play in the yard, help others when needed. She even learned to play WII Bowling with her grandson! She might be gone but she will never be forgotten. She will live forever in our hearts. Mary ‘s highest honor and achievement was the birth of her children. Mary Ellen is survived by her children, daughter, Nanci Janette Buff, and husband, Jerry; son, Tom Joe, and wife, Paula; sister, Katherine, and husband Bill; grandchildren, Tom Joe Jr., and fiancé, Jennifer; Nicole Joleelen, and husband, Randy; Jessy Joseph Lee Buff, and Fiancé, Jennifer Rose; great-grandchildren, Jessica Mary Ellen, Nevaeh, Alayna, Caleb, Brianna, Skylee, and Brodie; nephews, Mikeal, Tinker, Tim and Billy; nieces, Shari, and Jennifer. Mary was preceded in Death by her husband, Harvey H. Nichols; their son, Robert Lee Nichols; parents, John Lee and Mattie Jane Burns; siblings, John Lee Burns Jr., Franklin Brooks; grand-children, Danielle Marie, and Jason Thomas; nephew, Benjamin Phillip.

It saddens our hearts to announce the passing of Mary Ellen Nichols. Our amazing and beloved Mom, Sister, Grandma, Great-grandma, Aunt, Cousin, and FRIEND. Mary was born in Fort Worth, Texas on November 20, 1929. She was raised in Pomona California,... View Obituary & Service Information

The family of Mary Ellen Nichols created this Life Tributes page to make it easy to share your memories.

It saddens our hearts to announce the passing of Mary Ellen Nichols....

Send flowers to the Nichols family.