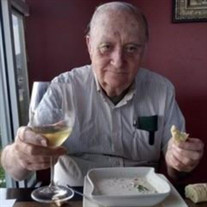 Michael T. McCallion, a devoted and loving husband, father, and friend, passed away on February 28, 2021, in Tehachapi. Mike was born on December 30, 1938, in Brooklyn, New York to Gertrude and James McCallion, the oldest of their five children. After high school, Mike joined the Army and served in the Korean War, and was a member of the Honor Guard Company. When he returned home, he met and married his love and lifelong companion, Edna Trotter, on April 22, 1962. With Edna’s support, he attended the City College of New York (CCNY), taking a position with the Federal government after graduation. In 1967, they moved to Ridgecrest where they fell in love with the high desert of California. After moving to San Diego in 1970, Mike had a successful career in civil service, retiring as a Division Head from the Naval Operational Systems Center in 1992. Mike and Edna have lived in Tehachapi since 1994 and loved their life in this beautiful part of California. Mike has made many close friends and was an active member of the community. He quietly volunteered at local organizations including the Tehachapi Depot Museum, Have a Heart Humane Society, Tehachapi Loop Railroad Club, Stallion Springs Community Services District and Property Owner’s Association, and the United Church of Christ. Throughout his life, Mike was an avid reader of history and enjoyed classical music, gourmet food, and fine wine. He was an artisan woodworker making furniture and wood turnings. He and Edna spent much time cooking and traveling on many adventures including trips to Alaska and South America. His daughters fondly remember living room dances with their dad to Mozart and banjo music. Mike is survived by his beloved bride of 59 years, Edna and daughters Laurie (Jerry) and Lynette (Robert) as well as many close and loving friends in Tehachapi and beyond. He is preceded in death by his beloved grandfather, Thomas Martin, who welcomed him home. In lieu of gifts or flowers, please consider donating in Mike’s honor to an organization he loved, Best Friends Animal Sanctuary. www.bestfriends.org Please go to this site's tribute wall for condolences and messages.

Michael T. McCallion, a devoted and loving husband, father, and friend, passed away on February 28, 2021, in Tehachapi. Mike was born on December 30, 1938, in Brooklyn, New York to Gertrude and James McCallion, the oldest of their five children.... View Obituary & Service Information

The family of Michael Thomas McCallion created this Life Tributes page to make it easy to share your memories.

Michael T. McCallion, a devoted and loving husband, father, and...

Send flowers to the McCallion family.