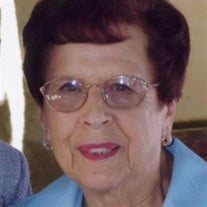 Nina Cervantes Munguia 1922 – 2018 Nina Cervantes Munguia, 96, passed away peacefully on Friday, August 17, 2018, in Bakersfield, CA. Nina was born in the Winter of 1922, to Dolores and Isabel Cervantes, in a little green house on F Street in Tehachapi. She lived all her life in Tehachapi until the day before her 95th birthday. After attending the local Tehachapi schools, she graduated from Federico’s Beauty School, becoming a licensed beautician, and worked in a local Tehachapi beauty shop. During World War II while the men were away fighting, she temporarily worked for Monolith Portland Cement Company. She met Albert Munguia in Tehachapi, and they were married in 1948. As a member of St. Malachy’s Catholic Church, she was involved in the Altar Society. She enjoyed sewing, needlepoint, cooking, and especially baking for the holidays to share with her family. Her children and grandchildren upon arrival in her house, headed straight to the Tupperware, always filled with home-baked goodies. Nina is survived by daughters, Debbie (Dan) of Tehachapi, Diane (Henry) of Bakersfield; son, Mark (Michele) of Sacramento; five grandchildren; five great-grandchildren, with one on the way; sister-in-law, Pearl Cervantes; and many nieces and nephews. She was preceded in death by her parents; husband, Albert; sister, Laura Ramos; brother, Gilbert Cervantes; niece, Joscelyn Cervantes; nephews, Mike Mancuso and Jim Ramos. The family would like to thank Phela, Daisy, Sarah, and Lori of Hoffmann Hospice and the nurses at Brookdale-Calloway for their care of our mom. A viewing will be held at 4 p.m. on Sunday, August 26, at Wood Family Funeral Service, 321 West F Street, Tehachapi, CA. A Rosary will also be held on August 26, at St. Malachy Catholic Church, 407 West E Street, Tehachapi, CA, at 6 p.m. On August 27, a funeral mass will be held at 10 a.m., at St. Malachy Catholic Church. Interment to follow at Tehachapi Public Cemetery Westside. “I have fought the good fight, I have finished the race, I have kept the faith” 2 Timothy 4:7

The family of Nina Cervantes Munguia created this Life Tributes page to make it easy to share your memories.

Send flowers to the Munguia family.