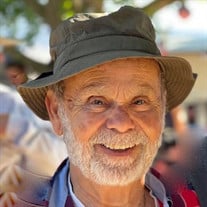 Paul Benz passed away on Sept. 23, 2021, two days shy of his 77th birthday. He was surrounded by family and went peacefully at his home. Mr. Benz was born in 1944 in Glendale, Calif., to Vera and Paul J. Benz. He was the youngest of five children and the only boy. He was proudly of German and Italian descent; however, he unapologetically was 100 percent a red-blooded American man. Despite never achieving a high school diploma, Paul went on to create many successful businesses through hard work and determination. Paul married his wife, Joan, in 1964 and the lifelong couple recently celebrated their 57th wedding anniversary. He made Tehachapi his home in 1975 and was absolute in supporting the town through endless charitable contributions throughout his life. His generosity is second to none. The Benz Youth Sports Complex that hosts thousands of kids each year in various sports is one of Mr. Benz’s signature achievements. Paul believed in Tehachapi as a community and the people who were part of it. He held family in high regard and his kids had better get home for holidays. No exceptions! Mr. Benz was an avid outdoorsman and traveled near and far to enjoy God’s creation and the peace he received from the solitude of remote locations was immeasurable. He was one of the original founders of the Tehachapi Search and Rescue Team and believed that supporting military veterans and law enforcement was essential. Paul is survived by his wife, Joan; their four children and their spouses, Karla Rogers, Julie and Jeff Sanchez, Paula and Paul Krier, Pickle and Cassie Benz; 11 grandchildren, and one great-grandchild; his sisters, Shirley Nepote, Betty Krzyzopolski, Caroline Spicher; his brothers-in-law, Norbert R. Ebersberger and wife Rebecca, Randolph J. Ebersberger and wife Carren, and numerous cousins, nieces, nephews, and friends. Services will be held in Tehachapi on Thursday, Oct. 7, 2021, at 11 a.m. at Saint Malachy Catholic Church located at 407 W. E St. A memorial gathering will be held at the Benz Building located at 1401 Goodrick Drive immediately following. Interment will be Friday, Oct. 8, 2021, at San Fernando Mission Cemetery in Mission Hills, Calif. at 11:30 am.

Paul Benz passed away on Sept. 23, 2021, two days shy of his 77th birthday. He was surrounded by family and went peacefully at his home. Mr. Benz was born in 1944 in Glendale, Calif., to Vera and Paul J. Benz. He was the youngest of five children... View Obituary & Service Information

The family of Paul Benz created this Life Tributes page to make it easy to share your memories.

Send flowers to the Benz family.