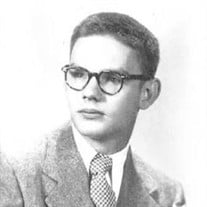 Celebrating and Remembering Robert Lee Halasey 1932-2021 Robert Lee Halasey was the third child to James Christopher Halasey and Linna Aurelia Nicholls (Halasey). He was born in Luverne, Minnesota. Robert passed away peacefully at his home in Tehachapi, California He was preceded in death by his parents and siblings, Dorothy Morrell and John Halasey. Robert is survived by his wife of 56 years, Helen, and by his son Michael James Halasey and children Linda Ann Rogers and Frank (Jim) Rogers; grand children Kristy, Katie, and Kelsey Nalder, Amber (Eric) Walker, Jonathan James Rogers and wife Tong, Madison, Riley and Brook Halasey, and great granddaughters Darby and Rory walker, and Roberts sister, Ruth Blott. He will be remembered as a loving husband, father, and grandfather. Robert will be buried at the Bakersfield National Cemetery in Arvin, California, with military honors, having served in the US Air Force during the Korean War from 1952-1956. He served in the 357th Fighter Interceptor Squadron in French Morocco and 513th at Manston Royal Air Force Station in England. Robert was a member of Tehachapi Valley Methodist Church at the time of his passing. Robert was a graduate of the University of Iowa with a BA degree in Math and a minor in Physics. He was employed at NASA Flight Research Center at Edwards Air Force Base as an aerospace engineer and system analyst until his retirement in 1985. Although Robert’s day job was with NASA, he was a tuba player at heart. Until moving to Tehachapi, he worked as a studio musician at Burbank Studios. Robert was also a member of the Los Angeles Police Department Concert Band, the National Community Band, The Windjammers Circus Band, the Burbank Community Band, WBCCI Airstream Band, and the Antelope Valley Jazz Band. He enjoyed playing with the jazz band at the Ocho Rios Jazz Festival in Jamaica. Robert further participated in “Tuba Christmas” at the Dorothy Chandler Pavilion in Los Angeles where he joined Hundreds of tuba players for a Christmas concert each year. During Octoberfest, Robert played with John Dermody and the Powerkrauts at the Edelweiss German Restaurant and he played with “Chip and the Monks” Dixieland Band at Vincenzo’s Pizza in Newhall, CA. Robert also performed with the Valley Symphony orchestra in Van Nuys, Symphony of the Canyons in Santa Clarita, Santa Clarita Valley Concert Band, Antelope Valley Brass Quintet and the Burbank Concert Band. Robert will forever be remembered as “Tuba Bob”.

Celebrating and Remembering Robert Lee Halasey 1932-2021 Robert Lee Halasey was the third child to James Christopher Halasey and Linna Aurelia Nicholls (Halasey). He was born in Luverne, Minnesota. Robert passed away peacefully at his home in... View Obituary & Service Information

The family of Robert Lee Halasey created this Life Tributes page to make it easy to share your memories.

Send flowers to the Halasey family.