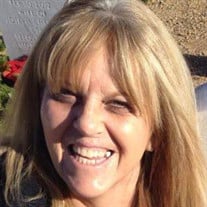 Rolinda Lee Kennedy-Jenson, 65, of Rosamond, California, passed away on Wednesday, November 24, 2021, at Adventist Health in Tehachapi. Linda had the most beautiful soul, with a kind and humble spirit. Linda was beyond loved and adored by all that had the pleasure to know her. The world won’t be the same without her. Linda was born on January 28, 1956, on Edwards Air Force Base, California, to Earl Adams and Karen Kennedy. She married Jeff Jenson in 1996. Linda moved from North County San Diego in 1999, where she worked as a licensed CNA at Pomerado Hospital, to Rosamond where she worked as a manicurist at Hang Tan, as a bartender at Mojave Elks Lodge 2059, and Mike’s Roadhouse. At the time of her death, she was the Canteen Manager at Rosamond VFW Post 9657. Linda loved dancing, was a member of the Cal City Ladies’ Auxiliary Cooties, Mojave Elks, and H.O.G. Ladies of Harley. She was an active member of the community and would help anyone in need. Linda is survived by her husband, Jeff, of Rosamond; 2 daughters, Niki Scott of Lansing, KS and, Brittany Jenson of Lake Forest, CA; 3 sons, Daniel (Bose) Matthews of Mojave, CA, Justin Jenson (Natasha) of Oceanside, CA, and Cody Jenson of Lake Elsinore, CA; 7 grandchildren, Kayla Matthews, Morgan Hunter, Collin Scott, Kaylee Scott, Jace Jenson, Jayden Jenson, and Penelope Jenson. She is also survived by 3 sisters, Renee, Cheryl, Kim; and her best friend, Laura Clark. She was proceeded in death by her parents and her brother, Randy. May God bless the memory of Rolinda Lee Kennedy-Jenson. A Celebration of Life will be held on Saturday, January 15, at Rosamond VFW Post 9657, 1990 El Rey Street, at 1 pm. Food and karaoke to follow. Interment will be held at Mojave, CA. cemetery, at a later date.

Rolinda Lee Kennedy-Jenson, 65, of Rosamond, California, passed away on Wednesday, November 24, 2021, at Adventist Health in Tehachapi. Linda had the most beautiful soul, with a kind and humble spirit. Linda was beyond loved and adored by all... View Obituary & Service Information

The family of Rolinda Lee Kennedy-Jenson created this Life Tributes page to make it easy to share your memories.

Send flowers to the Kennedy-Jenson family.