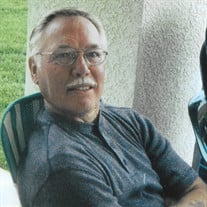 Ronald Lee Adams 1938 – 2018 Ronald Lee Adams, 79, passed away in Tehachapi, at home with family, on June 15, 2018. Ronald was born to parents Stuart and Hazel Adams in Ontario, California. When he graduated from high school, he entered the Navy in 1957, where he served as a Corpsman. After leaving the Navy, he moved to Olympia, WA, and worked as a parts manager for the Bremerton Volkswagen dealership. He then went to school to become a dental laboratory technician. He moved back to California in 1974, where he worked for a dental laboratory until moving to Oroville in 1976. There he opened his own dental lab. In 1995 he closed his lab and semi-retired, working part-time. In 1996 he and his wife decided to full-time RV and traveled the country for seven more years before settling down in Tehachapi in 2003, living next to daughter Terri and her family. He spent the next 14 years caring for his yards and tinkering in his shop. He loved getting on his tractor, even if it was to move dirt from one pile to another! Some of Ronald’s hobbies were camping, RVing, motorcycles, tinkering in his shop, and landscaping his land and home. Ronald was preceded in death by his son, Gregory. He is survived by his wife, Barbara; daughter, Terri and her husband, Pete Sturn; son, Andy Adams and his wife, Tina; and grandchildren, Ashleigh Powell, Rick and Ryan Adams, Jim, Abby, Jessie, Conner, Malachi, and Kayleigh Sturn. A viewing will be held at 4 p.m. on Friday, June 22, 2018, at Wood Family Funeral Service, 321 West F Street, Tehachapi, CA. Interment will be held at 2 p.m. on Friday, July 6, 2018, at Bakersfield National Cemetery, 30338 E. Bear Mountain Blvd., Arvin, CA. Services are being arranged through Wood Family Funeral Service, Inc. For condolences please visit www.woodmortuary.net.

Ronald Lee Adams 1938 &#8211; 2018 Ronald Lee Adams, 79, passed away in Tehachapi, at home with family, on June 15, 2018. Ronald was born to parents Stuart and Hazel Adams in Ontario, California. When he graduated from high school, he... View Obituary & Service Information

The family of Ronald Lee Adams created this Life Tributes page to make it easy to share your memories.

Send flowers to the Adams family.