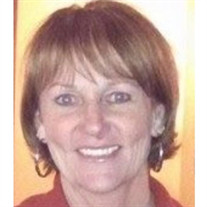 Roslyn Rae Beers (Snyder) passed away on March 20, 2020, in Bakersfield, California at the age of 59. She was fighting cancer but lost the battle to pneumonia. Roslyn was born on November 13, 1960, in Kremmling, Colorado, to Wilma Louise Knox and James Edward Snyder. She was the youngest of 4 children, Tim Snyder, wife Yolanda, Tom Snyder, and Randy Snyder, wife Kim, all of which she was survived by. They lived on a 25-acre farm north of Lamont, but she attended elementary and middle school at Mountain View and high school in Arvin. Roslyn worked for the California Highway Patrol for 14 years. She started as a dispatcher then went to the academy and became an officer. She loved her work and everyone she worked with but her true passion was working with her animals, horses, and dogs. Roslyn was the happiest when she was riding horses with her family and friends. Roslyn was part of the Hill Top Team Penners in Tehachapi for many years. She met her husband, Robin, in Las Vegas at the NFR and moved with him to Creston, California. Roslyn and Robin put on regular barrel races at their home arena for several years. They lived there together for 16 years and then moved to Tehachapi, California. Roslyn loved her family more than anything in this world and loved being a grandma. She was also survived by her husband, Robin Beers; stepfather, Terry Horan; her children. Amy Burkhart, husband Dustin, Logan Ferry, wife Kaitlyn; step-children, Trace Beers, Crystal Reaves, husband Wade, Jaime Glenn, husband Jason, Jennifer Cliff, husband Daren; and her grandchildren, Easton Burkhart, Dustie Burkhart, Hallie Burkhart, Parker Cliff, Reagan Glenn, Quinn Reaves, Thomas Glenn, Mae Reaves; 9 grand-dogs and several nieces and nephews. She was preceded in death by her father, James Snyder; mother, Wilma Horan; and her son, Cody Garrett. A memorial service will be planned at a later date.

Roslyn Rae Beers (Snyder) passed away on March 20, 2020, in Bakersfield, California at the age of 59. She was fighting cancer but lost the battle to pneumonia. Roslyn was born on November 13, 1960, in Kremmling, Colorado, to Wilma Louise Knox... View Obituary & Service Information

The family of Roslyn Rae Beers created this Life Tributes page to make it easy to share your memories.

Send flowers to the Beers family.