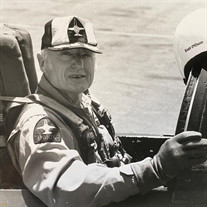 Russell Patrick O’Quinn, age 93, died April 12, 2022, in the comfort of his Tehachapi home of 34 years. He will be laid to rest at Bakersfield National Cemetery surrounded by close friends and family. A memorial service, open to all, will be held at Faith Community Church in Palmdale on May 14th. Russell was born to Jesse and Pearl O’Quinn on August 1, 1928, in Oklahoma City. After graduating from high school, he accepted an offer from his Aunt to pay for him to attend John Brown University in Arkansas. While there, he received the best education of his life because it was there that he accepted Jesus as his Savior. After attending college, he joined the Air Force. He married the love of his life, Mary Alice O’Quinn, on November 16, 1952, at the youth group on a Sunday night. While working in Japan for Douglas Aircraft, God used their four years there to launch a church, as a result of Russell’s popular Sunday school teaching. In 1966 he started the first civilian Flight Test Research company in Long Beach, CA. The U.S. State Department asked to use his skills in Biafra and Bangladesh to drop food and medicine to the locals for needed relief. Russell later designed and built the Skyfox, a state-of-the-art jet fighter, featured in a PBS special. In 1984, Life Magazine featured him as one of the top five test pilots in the U.S.A. For the past 30 years, he and his wife have traveled to tell his story and share the message of salvation through Jesus Christ to any and all who would hear, including many churches and organizations internationally. You can see him share his story at this link: https://youtu.be/6Gy0GXsy93Y Russell enjoyed reading his Bible and Spurgeon's books, watching old classic movies, and telling stories of his adventures–especially to his grandkids. Though now absent in body from this earth but present with the Lord, Russell is survived by his loving wife of 69 years, Mary Alice O’Quinn; three sons, Billy O’Quinn, Michael O’Quinn, and Timothy [Karen] O’Quinn; two daughters, Janice [Bob] Urke and Vicki [Tim] McClure; sixteen grandchildren and twenty-five great-grandchildren. To contribute to Russell O’Quinn’s memorial services, checks can be made out to Mary Alice O’Quinn and sent to PO Box 1428, Lancaster, CA 93584.

Russell Patrick O&#8217;Quinn, age 93, died April 12, 2022, in the comfort of his Tehachapi home of 34 years. He will be laid to rest at Bakersfield National Cemetery surrounded by close friends and family. A memorial service, open to all,... View Obituary & Service Information

The family of Russell Patrick O'Quinn created this Life Tributes page to make it easy to share your memories.

Send flowers to the O'Quinn family.