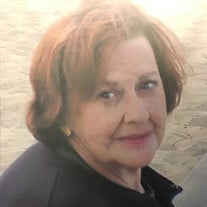 Sheila Jean Saranpa 1931 – 2019 Sheila Jean (Doen) Saranpa, of Bear Valley Springs, California, peacefully went home to the Lord surrounded by her family on June 13, 2019. She was 87. Sheila was born on August 1, 1931, in Beverly, Massachusetts, to Loran Fuller Doen of Lynn, Massachusetts and Catherine (“Kitty”) Ann Moxey, of Edinburgh, Scotland. The family moved to Cleveland, Ohio, and Loran and Catherine eventually divorced. Sheila and her brother Nathan were orphaned around 1942 and raised in separate foster homes. Sheila graduated from Fairview Park High School in Ohio, in 1949. She acted and sang for a short time in community theater in the Cleveland area. She married Roland Jalmer Saranpa on October 13, 1952. Together they had six children and moved to the San Fernando Valley area of Southern California, in 1966. Roland and Sheila divorced in 1968. Sheila raised all six children, on her own, working several jobs at a time, instilling in them her strong sense of integrity, her unparalleled work ethic, her love of music (classical to rock) and incredible sense of humor. Sheila moved to Bear Valley Springs in 1995. Prior to her move, Sheila worked as an executive secretary, transcriptionist, and at many other administrative jobs in the San Fernando Valley, retiring as a member of the Teamsters Union through her work at Bohemian Distributing. She retired later from Hughes Aircraft as the Commuter Services Administrator. Two of her main duties were handling the ridesharing program and the associated newsletter for which she received many accolades. Her part time jobs included secretarial positions and jobs in the service industry. She loved people and wound up working evenings at several small bars in the San Fernando Valley (she played a mean game of pool). Retirement didn’t suit Sheila, so after moving to Bear Valley Springs, she continued working for Avtel in Mojave and finally work at the Bear Valley Springs Gate in Bear Valley Springs, California. Residents and visitors alike will remember her warm smile and kind heart. She retired with 10 years of service in 2016 at the young age of 84. Sheila was fiercely proud of her Scots heritage and traveled to Scotland for the first time in 1989. It was an emotional visit as her relatives in Scotland had wanted to raise her and her brother after they were orphaned, but World War II prevented them from traveling. Sheila’s mother had wanted to go home to Scotland, but never did – she passed away at the age of 46. Some of Sheila’s favorite pastimes were spending time with her very large family, playing Hearts, Jeopardy, golfing, walking, planting her “blooms”, puttering in her garden and just enjoying time together. Nominated by her children, Sheila was selected as the Tehachapi Mother of the Year in 2002. Sheila was a woman of deep Christian faith, musically talented and an animal lover without peer. Her low contralto voice, her sparkling brown eyes, and her disarming sense of humor attracted many friends; she will be truly and painfully missed by many. Sheila is survived by her six children, Kathy Saranpa of Halle, Germany; Kristy Scott (James) of Carson City, Nevada; Kelley Dehart (Lenny), and Robert Saranpa of Bear Valley Springs; twins Jodi Inglett of Tehachapi and Jack Saranpa of Lake Havasu City, Arizona; her beloved nephew, Jeffrey Doen (Jeannette) and his family; 12 grandchildren; 20 great-grandchildren; and one great-great-granddaughter. She is predeceased by her parents, Catherine Ann Moxey and Loran Fuller Doen; and her beloved brother, Nathan Mansfield Doen and his wife, Karla. Her family was blessed by her wit and her wisdom. One of her favorite responses in times of trouble was “this too shall pass”. Services will be held on June 30th, 2019, at 2:00 p.m. at Bear Valley Springs Community Church. If anyone wishes to donate in her name, her two favorite charities were the Tehachapi Humane Society and the Tehachapi Teen Crisis Pregnancy Center. Funeral arrangements were made with the assistance of Wood Family Funeral Service. For condolences please visit www.woodmortuary.net.

The family of Sheila Jean Saranpa created this Life Tributes page to make it easy to share your memories.

Send flowers to the Saranpa family.