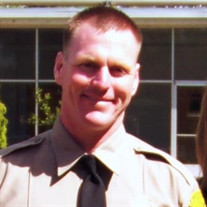 “How do I be good?” he used to ask as a child. From the time he could form words, Skjonning Kevin Verigan, or SK, as everyone knew him, was concerned with what was right. And though he lived only 39 short years, he certainly figured it out. He wasn’t just a good man; he was a GREAT man. Born to Kevin and Tina Verigan on the 7th of May 1981, he was the firstborn grandchild to Vernon and Bette Sorenson and brought spirit and joy into the lives of all of those he encountered. It wasn’t, however, until his brother Everett joined his story, just four years into his own, that that joy was returned to him. He loved his brother with a passion and took great pride in teaching him all he knew. For example, how to play football, and what it meant to be a Chargers fan. They were inseparable and lived the first 18 years of their lives together in Pioneertown, California. In fact, the only time they were apart was when SK was serving his country. After high school, he joined the United States Army where he was first stationed in Fort Riley, Kansas, followed by intrinsic action in Kuwait. He was in Kuwait when 9/11 took place, sending his family and friends into a state of worry. Little was known about what was happening in the Middle East then and communication had been cut. Later, he was honorably discharged just prior to the war in Iraq. He wanted to re-enlist but, in the end, he listened to the pleas and cries of his family. This was perhaps his only regret as he was most proud of having served in the US Army and wanted to continue serving with his brothers in arms. Upon completing his 4-year stint, SK returned to the United States and purchased a house in Escondido, California where he and Everett lived and studied Criminal Justice at Palomar College. After graduating, SK embarked upon a career with the CDCR (CCI) in Tehachapi, California and Everett followed not long after his own graduation. While he missed the action of city life in San Diego, he couldn’t leave the friends he had made in Tehachapi. Nothing could top a good conversation except for maybe a good conversation with a cold beer and he was never shy about sharing his opinion. But at the heart of it all, he valued his relationships, with friends, family, and his dog Magnus, above all else. He was a runner of marathons, an aficionado of martial arts, particularly Jujitsu, a hunter, traveler, and a defender of life. Today, as he exits his own story, he will forever be a part of ours. He is survived by his mother, Tina Verigan, his father, Kevin Verigan, his brother Everett Verigan, many aunts, uncles, cousins, friends and his CCI brothers and sisters. In the wake of his legacy, he leaves us with the lesson of staying loyal, of being honest, and doing what’s right. And above all else, of being good and living the good life. Sk will be laid to rest at Joshua Tree Memorial Park in Joshua Tree, California. Wood Family Funeral Service has been entrusted with his care. For condolences, please visit www.woodmortuary.net.

&#8220;How do I be good?&#8221; he used to ask as a child. From the time he could form words, Skjonning Kevin Verigan, or SK, as everyone knew him, was concerned with what was right. And though he lived only 39 short years, he certainly figured... View Obituary & Service Information

The family of Skjonning (SK) Kevin Verigan created this Life Tributes page to make it easy to share your memories.

Send flowers to the Verigan family.