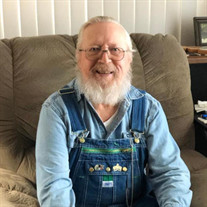 Solomon Edward “Ed” Shingler, 83, of Tehachapi, Calif., passed away on Thursday, March 19, 2020 at his home. He was born on September 18, 1936 in Buchtel, Ohio to Henry and Majel Shingler. Ed started his career as an electrician while he was serving our country in the United States Navy. In 1957, he started at Monolith Portland Cement Co. and was fondly known as “Whiskers.” He retired in 1990 as a Plant Instrument Tech. He served as a Financial Secretary for the Local 52 Union and was also involved in what was then Monolith Credit Union, as a Credit Committee Member and Board Member. Ed was a long-time resident of our community and called Tehachapi “home” for the last 64 years. He enjoyed riding his motorcycle, fishing and camping with family and friends, and polishing and shaping his rocks. He was preceded in passing by his beloved wife, Margaret Shingler; sister, Juanita Yorsten; and grandsons, Jonathon Coolbaugh and Ty David Kelnhofer. Ed is survived by his children, Julie Wilson (Jim), Bill DeHart, Debbie Kelnhofer (Michael Pack), Colleen Macias (Fernando), Shelley Harmon (Don), and Melissa Macias; sisters, Shirley Davidson and Marlene Tressler; sisters-in-law, Penny DeHart and Lorina Powell; 23 grandchildren; and numerous great-grandchildren, nieces, and nephews. The family would like to thank Dr. Riggs and his staff, Valley’s Best Hospice A.V., High Desert Medical Group, and City of Hope in Lancaster. Funeral arrangements are entrusted to the care of Wood Family Funeral Service in Tehachapi, Calif. Ed and Margaret will be privately laid to rest at Tehachapi Public Cemetery – Eastside, 820 Burnett Road, Tehachapi, Calif. 93561.

The family of Solomon Edward "Ed" Shingler created this Life Tributes page to make it easy to share your memories.

Send flowers to the Shingler family.