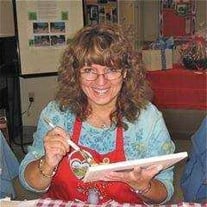 After an almost seven-year battle with the rare, terminal disease MSA, (Multiple Systems Atrophy), Teresa Jane Gracey, better known as Teri, finally stopped fighting on March 7, 2019, in her own home, surrounded by her family, her hospice team and a family friend. A lifetime resident of Tehachapi, born in Tehachapi Hospital to Mary Louise (Dee Dee), and Edward J. Bachara on Sept. 24, 1953, Teri touched and enriched the lives of countless people who will miss her immensely. Since the birth of her first child, Scott Christopher Dunn, on Feb. 24, 1971, Teri dedicated herself to being the best mother and wife she could possibly be, and even after Scottie lost his three-month battle with Lymphosarcoma, on Jan. 18, 1975, Teri put aside her own devastation to be a pillar of strength to her other children and the rest of his survivors. She made it a point to be at every important event of every one of her children, grandchildren and extended family, and if she couldn’t be there herself, she sent a thoughtful, homemade gift to let them know that she was praying for and thinking of them on their special day. Then she would commemorate that special day on her “family” calendar, which she painstakingly recopied every year, adding new births and anniversaries as our already large family grew throughout the years. She is survived by her husband, James F. Gracey, and her children and their families. These include her daughter Jodi (Dunn), son-in-law David Stauffer and their sons, D. Scott, Django and Leeland James, her son, Jeremy, daughter-in-law Brandie Dunn, and their children, Sage and Steele, her son Dakota Gracey, her mother-in-law, Patricia (Davis) Gracey, and her siblings, Frank Bachara, Katie Philips, and Robin Cummings, and their spouses, children and grandchildren. She is also survived by numerous in-laws, many cousins, extended relatives and friends. Her amazing artistic talent, creativity, loving nature and calm, nurturing strength will be missed by all who knew her, but we are comforted knowing that she has escaped her ailing body and has found peace with her heavenly father, and that she is finally reunited with her son, Scottie, both sets of grandparents, her parents, her aunt, Julia Thornburg, her brother, Shawn Bachara, her sisters, Sandra Vasquez and Patricia Kathleen (“Tinker”) Bachara, and her sister-in-law Ellen Gracey. Until we join them all in heaven, we treasure the gifts she has painted, sewed, embroidered, cross-stitched, and made for us over the years. Her Rosary and viewing will be held at St. Malachy Catholic Church on Wednesday, March 13, at 6 p.m. The funeral will be held on Thursday, March 14, at 10 a.m., also at St. Malachy Catholic Church and will be officiated by Fr. John Gracey. Graveside services will be held at the Tehachapi Public Cemetery-Westside. Although flowers are welcome and appreciated, anyone who would prefer to make a donation in lieu of flowers is welcome to donate to the Tehachapi Parks Foundation. Be sure to designate the payment for the Teri (Bachara) Gracey memorial Fund (https://www.tvrpd.org/about-tvrpd/sponsors/71-donate.html). We’d like to thank Omni Hospice for their dedication to Teri during the past four months and Wood Family Funeral Service, Inc. for their professional and timely handling of Teri’s final arrangements.

The family of Teresa "Teri" Jane Gracey created this Life Tributes page to make it easy to share your memories.

After an almost seven-year battle with the rare, terminal disease...

Send flowers to the Gracey family.