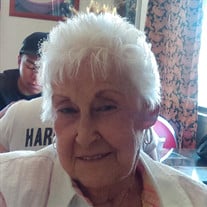 Theresa Marie Foster gently passed away on the afternoon of August 17, 2019 with her loving family by her side. Theresa was born on January 18, 1941 in Fort Dodge Iowa to Elizabeth and Charles Cotant. Theresa was child number 7 of 8 children growing up initially in the Midwest state of Iowa, then moving to California in the early 1950’s. Theresa always spoke of what a wonderful childhood she enjoyed with her large family as they all remained very close throughout their lives. Theresa married John C. Foster in 1957 and raised four children together, John Foster, Jr. Barbara (Foster) Minniear, Daniel Foster and Louis Foster. Theresa was a loving and devoted wife for 62 years to her surviving husband, John. She was a very strong and fierce protector of all of her children, grandchildren and more. Theresa was always supporting others throughout her entire life. She had a way of always being available to those who needed her. She was a terrific Wife, Mother, Grandmother, Great Grandmother and Friend to so many! After raising her own four children, Theresa went to work at Golden Hills Elementary School as a Cafeteria “Lunch Lady” for a lengthy 16 years while simultaneously running her own Private Daycare Business for many local Tehachapi Families. She raised many, many children in her life…and they all loved her dearly. Theresa was preceded in death by her son, Louis Foster in 2004 and is survived by her husband, John, her eldest son, John Foster, Jr., her Daughter, Barbara (Foster) Minniear, her son-in-law, Joe Minniear, her son, Daniel Foster and his wife Paige as well as her sister Kathleen Arbuthnot and brother-in-law Joel, her sister Beverly Bobb, her grandchildren, Sara Nelson, Amberlee Foster, Joshua (Foster) Akins, Rachel Scarborough, Kyle Abernathy, Michael Foster and Hallie (Foster) Watkins as well as her six great grandchildren. Theresa will be greatly missed by her family and friends. A Memorial Catholic Mass will be held on Tuesday, August 27, 2019 at 11:00 am at St. Malachy Catholic Church located at 407 West “E” Street in Tehachapi, CA. Woods Family Funeral Home is handling all arrangements.

Theresa Marie Foster gently passed away on the afternoon of August 17, 2019 with her loving family by her side. Theresa was born on January 18, 1941 in Fort Dodge Iowa to Elizabeth and Charles Cotant. Theresa was child number 7 of 8 children... View Obituary & Service Information

The family of Theresa Marie Foster created this Life Tributes page to make it easy to share your memories.

Theresa Marie Foster gently passed away on the afternoon of August...

Send flowers to the Foster family.