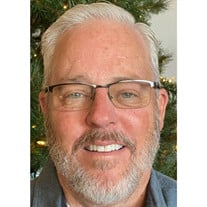 Vincent Gerard McLaughlin, 61, passed on December 5, 2020. On October 6, 1959, Vince was born to parents Bert Alford McLaughlin and Dorothy Genevieve Haubrich McLaughlin in the old Tehachapi hospital. Bert and Dorothy brought their new son home to a modest home on A Street where all the McLaughlin children spent their childhood. The Mclaughlin household prioritized work ethic, morals, and strong faith. Vince attended Wells Elementary, Jacobsen Junior High, and Tehachapi High School, all while serving as an altar boy at St Malachy’s Catholic Church. His time at Jacobsen Junior High and Tehachapi High School is where he began to excel in track, basketball, and football. He achieved all DIL in the previously listed sports and holds numerous records to this day. He attended Merced City College and later Cal State Hayward where he ultimately became the starting strong safety and an All-American punter. Vince Graduated from CSUB in 1984, with a Bachelor of Arts majoring in Criminal Justice and minoring in psychology. He leveraged this degree into a career with the department of corrections. Vince worked for the California Department of Corrections from his 26th birthday to his 50th. Serving at five correctional institutions across California, eventually retiring in 2009 from the California Correctional Institution – Tehachapi, as a Classification and Parole Representative, CC-III. Vince was an adjunct professor of Criminology at Bakersfield College for several years. Many of his co-workers at CCI attended his classes. He served on the Stallion Springs Community Service District Board of Directors, from December 16, 2014, to November 4, 2017. While at California Men’s Colony – San Luis Obispo, he met his wife of 33 years, Lisa Bowdidge McLaughlin. In March of 1988, the two gave birth to their son Mason, and later in July of 1990, their daughter Maggy. In 1992 they returned to Tehachapi to raise their family in a rural and wholesome environment. For the next several years not only did Vince focus on raising his children properly but also giving back to the community of Tehachapi, coaching T-ball, little league, girls and boys basketball, and ultimately high school football. He felt the Warrior Football program was not only geared towards the sport itself, but a conduit to instill qualities and ethics in young men that they could rely on for a lifetime. His exemplary leadership abilities flourished during his tenure as a Tehachapi High School football coach making a positive impact on hundreds of young men and if nothing else, his family hopes this is how his legacy will be remembered. Vince was survived by his wife, Lisa McLaughlin; son, Mason McLaughlin, and his fiancé Valerie Guzman; daughter, Maggy Grisafe and son in law, Mark Grisafe; and adored granddaughter, Mackenzie Ann Grisafe. Vince’s siblings are Timothy McLaughlin and spouse Debbie Schulgen, Phillip McLaughlin and spouse Kris McLaughlin, Anna Richards and spouse Ron Richards, Marian Herman and spouse Terry Herman, and Jennifer Kupka and spouse Andy Kupka, along with many beloved nieces and nephews. He was preceded in death by his mother and father. A celebration of life is being planned for the spring, in his hometown of Tehachapi, with details to follow.

The family of Vincent Gerard McLaughlin created this Life Tributes page to make it easy to share your memories.

Send flowers to the McLaughlin family.